Peter Lemiska
Garland is fishing in the wrong spot 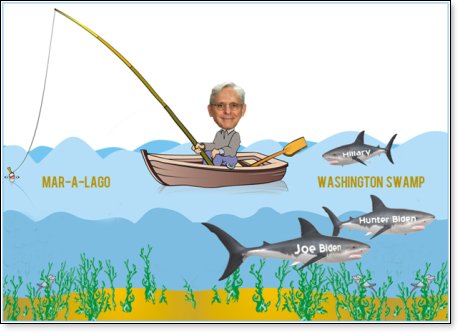 Hate is a destructive emotion that can rob us of our compassion, our dignity, and even our common sense. For six years now, Democrats have been consumed with an overpowering hatred of a man who left public office nearly two years ago. It’s the same man who gave our country energy independence, secure borders, and a strong economy with low inflation.

That aside, all those Trump-haters were granted a brief reprieve recently from the self-destructive rage that’s been eating away at them for so many years. In the aftermath of the FBI raid on Trump’s residence, they found a moment of elation. For just an instant, all that rage turned to jubilation, as they joyfully bantered about the possible sentences Trump would receive after he’s convicted of whatever criminal charges might arise from the raid. At long last, they would find true, everlasting peace.

More objective observers saw something entirely different in the unprecedented raid at Mar-a-Lago. Considering the likewise unprecedented dual impeachment proceedings Democrats initiated against Trump, they saw this FBI raid as just another ruthless and desperate attempt to eliminate a popular figure from the political arena. They saw the raid as a breach of longstanding protocol and the introduction of third-world tactics by a politically-biased Department of Justice. They saw little more than a blatant fishing expedition designed to find something – anything – that could be used to indict the former president. Democrats would see this obvious reality, too, if they weren’t so blinded by rage.

The search warrant makes it clear that, this time around, investigators are focused on the alleged mishandling of national defense and classified information by the former president. It authorizes the seizure of “any government and/or Presidential Records created between January 20, 2017, and January 20, 2021,” essentially any and all documents created during Trump's administration. It’s hard to interpret that as anything but a fishing expedition.

But there is a much larger issue than the wording on the search warrant. It’s the blatant inconsistencies by our DOJ and the excessive overreach in this case. Most would agree that a fair and objective system of justice is the lynchpin of all free societies. It’s what distinguishes democracies from totalitarian regimes. The unambiguous political bias of this DOJ is systematically destroying all trust in the American justice system, once the envy of the world.

Just a few years ago, Democrat Secretary of State Hillary Clinton was under intense scrutiny for mishandling highly classified information. It was essentially the same violation now alleged against Trump – only Clinton’s malfeasance was abundantly clear. Her long-time ally, James Carville, thought her purpose in setting up a private email server was simply to avoid congressional oversight. He said, “I suspect she didn’t want Louie Gohmert rifling through her emails.…” But anyone who’s ever worked for the U.S. government knows that her use of a private, unsecure server was a breathtaking breach of government security regulations, and that the destruction of those subpoenaed emails was a clear violation of federal law.

In fact, after an FBI investigation, Director James Comey announced that the bureau found “evidence of potential violations of the statutes involving the handling of classified information.” He also admitted that “it is possible that hostile actors gained access to Clinton’s personal emails.” That FBI investigation seemed, at best, perfunctory. It certainly didn’t include any nine-hour raids. Yet Comey casually dismissed the whole issue with these words, “[N]o reasonable prosecutor would bring such a case.”

Then there’s the Hunter Biden case, one potentially far more damaging to national security. When allegations of influence peddling at the highest level of government are made, we would expect all Americans to be concerned. When those allegations involve U.S. adversaries like Russia and China, we would expect universal outcry for a thorough investigation.

Yet those were the allegations against the Biden family during the 2020 presidential campaign. And they were more than just accusations. There was a mountain of evidence – including Hunter’s unexplained wealth, witness testimony, emails, and the infamous laptop. There was also irrefutable evidence of weapons violations by Hunter and the real possibility of coercion or blackmail of a U.S. president because of his son’s nefarious indiscretions.

The FBI has been in possession of the incriminating laptop since December 2019, but there’s no indication they have any interest in investigating the case. Officially, FBI representatives have deflected any questions about the case using the “ongoing investigation” pretext. But several intrepid whistleblowers inside the organization have confirmed what most Americans instinctively know – the FBI has essentially deep-sixed the Hunter Biden case.

The eventual outcome of Garland’s fishing expedition is far from certain, but the immediate impact is clear. Garland has managed to galvanize Trump’s supporters and widen the division within an already deeply divided country. He’s also accelerated the growing distrust of a justice system already perceived as corrupt.

Like the fictional Captain Ahab, it’s clear that Merrick Garland is obsessed with one thing. But if he really wants to land a big one, he would find the fishing much better in the Washington swamp.