September 18, 2009
Halleluiah! The Association of Community Organizers (ACORN) is finally receiving the correct type of attention by Congress. Ignoring five YouTube videos exposing its employees advising how to avoid taxes and how to lie on federally funded loan applications  well, that would have been difficult for Congress to explain to constituents. What else could Congress do but defund the organization instead of dishing out millions of dollars for fraudulent activities with taxpayers monies. But before dancing in the aisles, remember elected officials ignored the signs and warnings of ACORN's highly questionable voter registration activities during the 2008 Presidential General Election. 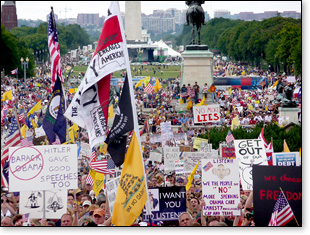 In reality, ACORN's demise began on the social network, Facebook. That's where Hannah Giles and James O'Keefe met and began to exchange discontent over corruption. According to September 16th New York Post article, Duo who turned this trick (Two young people who nailed ACORN) "in real life, Giles, 20, isn't a lady of the night. She's a minister's daughter studying journalism at Florida International University. And O'Keefe III, 25, a Fordham MBA student from New Jersey, isn't a pimp so much as a pro vocateur  determined to expose what he sees as the hypocrisies and moral lapses of liberals by employing their own tactics against them."

Does it really come as news to anyone that this is how ACORN operates at the lowest levels and perhaps at the highest? That's what needs to be investigated, not just defunded, disregarded, and then forgotten. If the Easter Bunny and Batman can vote, they can certainly reinvent themselves and dodge laws as ACORN employees so easily advised in the O'Keefe/Giles five videos recently.

So before we crown Congress with nobility and let it claim redemption as protectors of our well being, let's remember that a twenty-year-old and a twenty-five-year-old were the ones to go undercover posing as a pimp and his prostitute wanting assistance in obtaining an ACORN housing loan. Those on Facebook were quick to credit the young people for doing what Congress and other administrations have not done before  vet how ACORN uses federal funding. Now California Governor Arnold Schwarzenegger has promised to pull the plug on the ACORN operation in California.

Think about it. This has been an amazing week of change. First, Green Jobs Czar Van Jones resigns under fire when evidence of his openly communistic beliefs came to light in the blogosphere and on Fox News. Then the Senate defunds ACORN followed by the House of Representatives with clear majorities. Add 1.5 million voices from the 9/12 Project March in D.C. and perhaps there is hope for a return to the Constitution and the separation of powers protecting Americans' freedom from tyrannical power grabs.