December 15, 2009
Washington, D.C.  Tim Phillips knows what it's like to have protesters physically challenge him and his views. Days ago he experienced angry protesters jumping on stage screaming in favor of climate change proposals and against him and Americans for Prosperity's presence at the United Nations conference in Copenhagen.

As the protesters continued to chant, one of the AFP speakers, Lord Christopher Monckton called the activists "crazed Hitler Youth" and "Nazis" however, Phil Kerpen, the policy director of Americans for Prosperity, distanced himself from Monckton's comments. Kerpen wrote on Twitter, "DO NOT approve."

Today, Phillips and Kerpen are back at home leading yet another rally in front of the nation's Capital in protest of the pending Senate health care legislation  this one not expected to attract Copenhagen-like counter protests.

Our "Code Red" rally at the Capitol today, in conjunction with broad coalition, is making sure our voices are heard at a key time in the Senate debate. Then, we're asking folks to go inside the Senate offices to deliver the same "hands off my health care" message to their Senators."

The ever changing political environment here at home and abroad is continuing to challenge activists to question tactics and their effectiveness.

"I think it's good for our side and Americans in general, to see how the Left wants to silence and intimidate anyone not agreeing with them. Those tactics should not be for us. We're winning, moving the public to our side on health care and cap-and-trade, by pounding on the issues while still being respectful but firm with elected officials."

In early November, Congresswoman Michelle Bachmann (R-MN) led a similar rally on the steps of the Capital followed by visits to elected officials by those in attendance. Protesters visiting the offices of Speaker of the House Nancy Pelosi proceeded to throw pieces of the healthcare bill on the floor as suggested by speakers while others lied down and had to be removed by Capitol Police.

As the current political environment remains volatile and emotionally charged will protests become more and more radical in their tactics?

"I do not think that the American public will respond well to more "radical" tactics like those used by the Left but most of the polling and anecdotal evidence shows they are responding to our current tactics\strategies reasonably well," said Phillips just hours before today's Code Red Rally.

"Our tactics thus far have: killed cap-and-trade for the year, killed card check for the year, and as of mid December we have a fighting chance to defeat the health care takeover  all this despite fighting overwhelming odds in Washington politically and financially. Yes, we're losing some battles, too, and it's frustrating but we are also making a difference for our values." 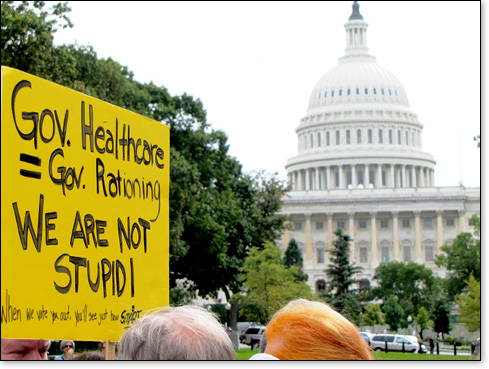