December 18, 2009
Atlanta, GA  Seventy five year old Doris Fowler has spent much of the last twelve years planning for Christmas year round. When it's humid in Hotlanta-Atlanta, Georgia, Fowler is raising money so that Jesus Christ can be part of the city's holiday decorations on Marietta Square in December. This year is no different except Doris is another year older and is moving a little bit slower.

When city officials decided in the mid-nineties to remove Jesus from the holiday displays, Doris confronted her elected officials. The compromise was to pay a fee, a thousand dollar per day. She must find a Nativity, find the money, and find a way to draw others to the square. As in years past, this year, there are choirs singing hourly from noon to 10 PM Thursday, Friday and Saturday, December 17-19rh.

Snow is predicted in the area and it should be cold again on Saturday evening. "Oh, Doris will be here. She won't leave, "says Ron Hollingsworth, Cobb County resident and board member of the Citizens for a Christian Christmas Celebration, the organization Doris founded to assist in promoting the Nativity on the Square. "She'll be here until her feet give out."

This Saturday Doris will be honored by the Atlanta Christian Conservatives, a politically active social group begun on Facebook.

"She was confronting elected officials long before it was considered a 'tea party,'" says an ACC group member. "Her efforts deserve recognition and are an inspiration for those who want to make a difference. Besides, it's a great excuse to invite like minded Georgians to gather holding blankets and hot chocolate instead of a sign!"

For Doris, Jesus is the Reason not only for the Season but for everything she does year round. Perhaps that is the bottom line. 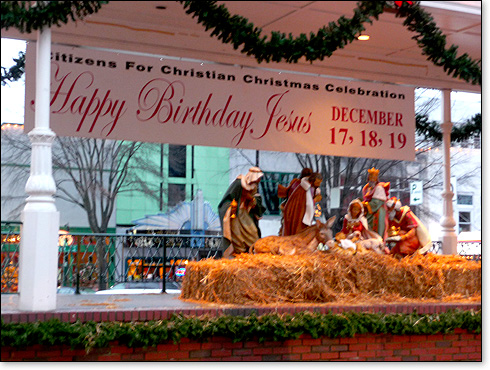