But the killing of unborn babies won't cross First Lady Michelle Obama's lips when she visits Atlanta, GA this week to launch her national initiative against childhood obesity. The state ranks No. 3 in childhood obesity, behind only Mississippi and Arkansas, according to a report last year by the nonprofit Trust for America's Health. More than 37 percent of Georgians aged 10-17 are obese, according to the group. 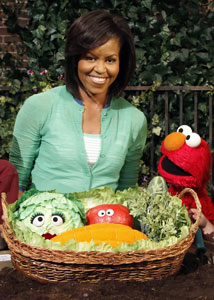 On Wednesday, Mrs. Obama will speak at one of Atlanta's mega churches, Northpoint Community Church. What's curious is why and how this selection was made. According to Pastor Andy Stanley (son of Pastor Charles Stanley, First Baptist Church of Atlanta), a friend who works at the White House called last week to ask if NCC was available to host the First Lady's campaign launch. "My initial response was, 'oh, good, the First Lady wants to come to church." Yes, but she will be doing the preaching.

The Northpoint CC board agreed and arrangements were in motion including notifying church members of the White House visit. Response has been mixed for obvious political reasons. North Atlanta is predominately conservative Republican in its voting and the city of Alpharetta where NCC is located is one of the most 'Red.'

Eating habits of children aren't normally of great concern in church but enter the First Lady of the United States, wife of the President, and it's a political hot potato. No one is against healthier children but using a church to springboard a government campaign appears to be disingenuous. Why not a school auditorium or youth center unless it's for access and favor for future campaigns in 2012?

If social issues are to be tackled in church, then why not open the pulpit for some straight Scriptural dissection on abortion — an incredibly important issue surrounding the health and livelihood of children. Northpoint Community Church is not known for embracing political issues much less political figures. No matter what way you cut it, it is intimidating for the White House to call and ask for accommodations for the First Lady. It's a one sided event unless she avails herself to questions about other social dangers to children, isn't it?

To give the First Lady her due respect is a given. For the President and Mrs. Obama to return that respect to the Christian community is another. Last year the Obamas did not attend the National Day of Prayer always attended by past Presidents rather to remain in the White House to participate 'privately.' Later the President gave a White House dinner to celebrate Ramadan.

Granted anywhere the First Lady goes is national news and will bring much media attention to this northern Atlanta church. One only hopes that was not a deciding factor for the board's approval. If Mrs. Obama wanted to attend service the response would most likely have been overwhelmingly positive. In reality however, Sundays have been more so spent at golf courses than at the gathering of the Brethren.