January 10, 2012
Denver Broncos Rookie Quarterback Tim Tebow's first overtime playoff pass to Demaryius Thomas not only led an upset against the Pittsburgh Steelers — notably the best defensive team in the National Football League — but also a place in the records books — the shortest OT in NFL history, 11 seconds.

''When I saw him scoring, first of all, I just thought, 'Thank you, Lord,''' Tebow said. ''Then, I was running pretty fast, chasing him — like I can catch up to D.T! Then I just jumped into the stands, first time I've done that. That was fun. Then, got on a knee and thanked the Lord again and tried to celebrate with my teammates and the fans.'' — Tim Tebow, January 8, 2012

Tim Tebow wasn't supposed to be in the first round of the NFL Playoffs with the Denver Broncos either. No one expected him or Denver to be anywhere with a lackluster season start, but they were on Sunday.

Tim Tebow wasn't supposed to even be in the National Football League after leading the Florida Gators to two national titles as quarterback and being a Heisman Trophy recipient. Coaches, sportscasters, players, fans alike debated whether he could change his throwing style needed to play professional football. And he did.

Tim Tebow wasn't supposed to be drafted much less be picked up in the first round of the NFL Draft ? But he was.

Tim Tebow wasn't supposed to use John 3:16 instead of Philippians 4:13, the scripture verse he inscribed with black strips on his face on game days. Then FL Coach Urban Meyer questioned strongly the switch before the 2009 BCS Championship game against Oklahoma. But Tebow did.

The list goes on and on what Tebow shouldn't be doing, defying expectations of naysayers at his demonstration of faith at any opportunity. Sportscasters have been fed heaping helpings of humble pie time after time. To punctuate their indigestion, 'tebowing' and has caught the attention of old and young people beyond the realm of sports. Some students have been suspended from high school for blocking hallways and amassing on gymnasium floors on bended knee in solidarity with Tebow.

And as a postscript, add this to the list:

Tebow wasn't supposed to be alive.

His pregnant mother was advised by doctors that her 'fetus' was not viable, to consider abortion since she could endanger her own life. She didn't and their story became a 2010 Super Bowl ad created by Focus on The Family ministry that has since had more than 5 billion impressions on the internet. Tebow told a packed Sunday morning service at First Redeemer Church in Cumming, GA in July 4, 2010, that he talks about his mother's choice not to abort was not politically driven but rather yet an opportunity to give Glory to God for what He has done for and through them.

What's next for Tebow and the Broncos is anyone's guess. Tebow would most likely say it doesn't matter. God knows. And he's fine with that. 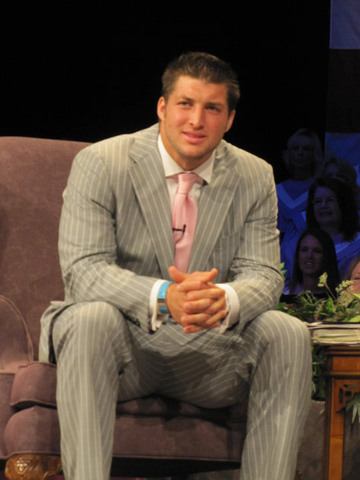 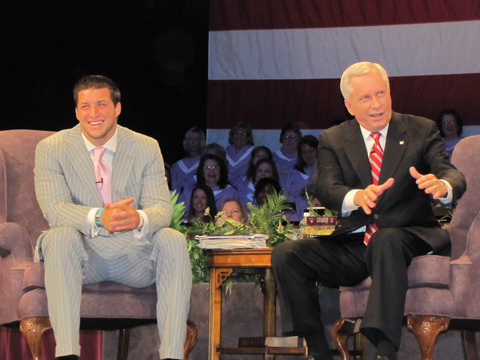