August 29, 2012
August 28, 2012 — It's not Katrina, but Tropical Storm Isaac is causing concern as it barrels toward New Orleans landfall on Tuesday evening. Undoubtedly, the southern coastal states are bracing for a storm surge followed by massive amounts of rain and tornadoes and potential loss of life and damages. It was seven years ago today and almost to the hour that the category 3 Hurricane Katrina left unprecedented devastation across three states. 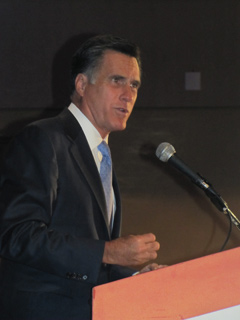 President Barack Obama says FEMA has been 'on the ground for a week' in LA, AL and FL. "As we prepare I want all residents to listen to local officials and follow their directions...Now is not the time to tempt fate," cautioned the President during a nationally television press conference just after 10 EST. "We will give continuous updates on both federal and local levels."

And that could suck much of the nationally televised attention away from the Republican National Convention convening for the first time since being in recess on Monday. Much of the mainstream media has opted out of airing the convention tonight when Mitt Romney's wife, Ann and New Jersey Governor, Chris Christie introduce Romney to a nation as its next President.

The quandary is being sensitive to those facing Hurricane Isaac and its aftermath and doing what the GOP has to do: endear Americans to vote Romney for President in November. Truth be known, Fox News which will be airing the convention proceedings in prime time and history is on FN side. Fox Presidential debates alone pulled almost 5 to 7 million viewers in September 2011 when there were nine candidates in the primary race and the countdown to election day was yet months away.

Convention organizers are hoping to strike a balance between coastal safety and convention urgency to catapult the GOP message to the American people who are just now considering the candidates.