July 5, 2009
This summer, Bay Life Church in Brandon, Florida is supporting the Village of Hope in Uganda. Scott Ranck led the "Survivor Uganda" team of 13 men who visited the village, helped build shelters, lay foundations and encourage the workers in the construction of the village.

Ranck describes children at the IDP (internally displaced people) camps as having lost everything. Many were forced to witness their parents being murdered at the hands of LRA rebels. "The kids that come to the safe house have no hope. We tried to provide them a bit of encouragement. Teachers regularly share the gospel massage with them, while the Bay Life Team shared with workers at the Village of Hope."

In 1987, a civil war erupted between the Ugandan government and a guerrilla army called the LRA. Since then, Northern Uganda has been under attack from the LRA Rebels, who burn villages, kill adults and abducted children. The children, some as young as six years old, are used as sex slaves or as child soldiers where they are forced to kill or be killed. Over 2 million people have been displaced by the war.

Across northern Uganda, IDP camps have formed to shelter orphaned children. Living in these camps, orphans are forced to fend for themselves, rarely attending school, and working for pennies just to make enough money to eat a meal. They are interviewed, and as many as possible are sent to a safehouse were they will be no longer in danger.

The final step in their journey will be to the Village of Hope were they can be rehabilitated and returned to a normal life. "The kids have been through a lot and are traumatized," says Ranck. Most the children are near Gulu where the safehouse is located. Bay Life Church has purchased 100 acres about 90 miles south of Gulu to build the Village of Hope. There are 19 children currently residing in the safe house and will move to the village as soon as housing and the primary school is up and running. "We plan for as many as 100 children when the camp is complete." If successful, the plan is to build more camps in other parts of the country.

Eventually the Village of Hope will build a primary and a secondary school, and a vocational school. Medical facilities and a church are also in the plans. The intent is for the camp to become self sufficient by the crops they grow, and to become a model for future Village of Hope camps. Brandon natives Mike and Janelle Doud and their daughter Jenna live at the camp full-time to oversee construction, and to liaisons between Bay Life Church and the Village of Hope. They have been living at the village site for four months.

Living conditions in the Village of Hope are harsh. Everyone lives in mud huts with a thatch roof. There were no machines to do the work. The workers clear the land and construct the buildings all by hand. Boulders are broken up to make gravel by a single sledgehammer. A team of workers and cooks are employed in construction of the Village of Hope.

The food is always some combination of beans, rice, and potatoes and maybe chicken. All water for drinking, food preparation and mixing concrete is carried into the camp by buckets from a well a half-mile away. "With three bathrooms to choose from in my home and a pool in by backyard, I could not describe to them what life is like in the USA," says Ranck. "They would never believe it."

What they do believe, however, is the scriptural verse from Joshua inscribed on the safehouse wall, "As for me and my household, we will serve the Lord." This summed our attitude," says Ranck.

While on the trip, "a girl who worked in a hotel where we stayed did come to receive Christ," says Ranck. "Her parents had been killed by the LRA. This alone made the journey worthwhile."

The "Survivor Uganda" team has returned as more than survivors, they are now ambassadors for the Village of Hope. Another team from Bay Life Church travels to Uganda this month. To find more information on the Village of Hope, go to www.villageofhopeuganda.com. 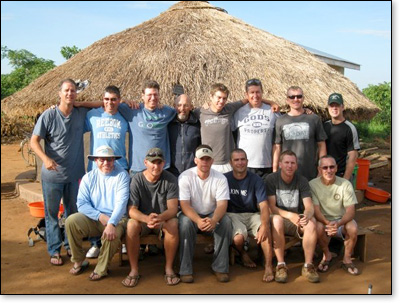 Picture caption: Scott Ranck (lower right), and Mike Doud (top fourth from left), and the Survivor Uganda team at the Village of Hope.