Frank Maguire
Some basic disagreements with an "American Thinker"

May 29, 2010
From Dreams of My Father: "I found a solace in nursing a pervasive sense of grievance and animosity against my mother's race."

From Dreams of My Father: "It remained necessary to prove which side you were on, to show your loyalty to the black masses, to strike out and name names."

From Audacity of Hope: "I will stand with the Muslims should the political winds shift in an ugly direction."

Both products are attributed to Barack Hussein Obama as the alleged author.

I received an e-mail with an article from American Thinker writer Geoffrey P. Hunt, entitled "Anatomy of a Failed President." And, though I am comfortable with some of Hunt's ideas, I am a bit jittery about some of the notions upon which he relies in his argument. It is a jittering like that I felt when I first read The Federalist Papers, feeling that the Papers are replete with internal contradictions. 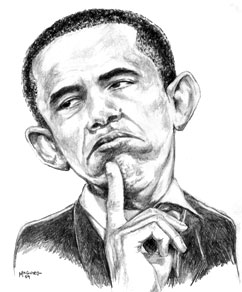 Hunt starts with the assertion that "Barack Obama is failing. Failing big! Failing fast!" But this, to me, begs the question "Failing at what?" A person is usually said to be a failure when he does not succeed at achieving the goals that he publically professed when making promises  his promises to the "people" about improving the great American Weltbegriff..."concept of the world."

But only those who know Obama in a cursory way ever took Obama's proselytizing seriously. I learned enough about Obama, the Alinskyite vicar, to know that Obama's promises of a stronger America are but the buzzing of a humbug.

Hunt quotes "the incomparable Dorothy Rabinowitz" of Wall Street Journal acclaim. Tell you the truth I don't know enough about Rabinowitz to make any comparisons. Hunt writes that Rabinowitz believes Obama "has no understanding of the American people." I disagree. Why?

Because Obama, the progressivist-narcissist really believes, in his heart of hearts, that his election to the presidency indicated that the New Era of Marxist-Leninist inevitability had finally arrived. It appears that Obama has made the same error that prior progressivists have made. Things for this wee mousie are going oft awry.

It seems to me that Barack Obama is so habituated to the hate-America, Lefty crappe that he joined the Church of the True Believer in which he was indoctrinated. His Chicago-machine, Windy City success has left him blowing in the restless winds of outrageous fortune.

An honest appraisal of Obama's electoral "success" is because he is Black.  or sufficiently so as to inspire the self-hating, racialist, faux-liberal factions in their frisson of moral superiority. They who assuage their neurotic insecurities by projecting their own crypto-racism onto people who practice no racial prejudice. Obama was well aware of his favored people. His political proselytizing was aided and abetted by the adoring, apotheosizing, ersatz-liberal main-stream press-gang. This shallow agglomerate views real-life as a fantastic, serial Reality Show. "Even if something real bad happens, heck, it'll be over in a season."

I had a fellow, usually sensible, who confessed, sotto voce, that he had voted for Obama. The fellow is a Democrat from the Fright'ning Illini State, and lives on a pretty good union pension. He discovered, one dreary day, to his dismay, that he had come down with a debilitating economic-lumbago of the wallet. He's not so happy anymore. He didn't exactly admit that he had erred big time. I came out more like The Fonz trying to say "I was wr-r-r-r.... I was wruh  wruh wruh...." He brushed this momentary bad judgment off with, "Oh well, politics always runs in cycles...he (the fellow was even reticent to say "Obama") won't be in there forever." No harm, no foul? Hardly a blip on the Richter Scale? I remained silent. One does not respond to such reasoning because it would be superfluous. The fellow already knew how ridiculous were his ratiocinations.

Hunt also cites Fred Barnes who to me is an enigmatic, all-over-the-map fellow, like Geraldo but without a stache. Barnes, of the Weekly Standard, has written, according to Hunt, that Obama "lost control of his message." Once more, I see this as an inadequate analysis of Obama. It seems to me patently obvious that Obama has merely failed at keeping his "message" a secret from the American people...that his "message," which he hoped would not be discovered too soon for comfort, has nothing to do with making America a stronger, sovereign nation. Only his strategy of concealment has failed.

(The amazing thing is that Obama has not really concealed his ideology, the main-stream press-gang has merely paradiddled the people with "This is what President Obama really meant.")

Hunt moves on to the ipse dixit that Obama rode-in on an "unprecedented promise of goodwill." Au contraire! Obama stormed-in upon an armored vehicle, flying the banner of Bush Angst . Upon a Blitzkreig financed by such as George Soros, and soldiered by ACORNS, other assorted "fruits," and the SEIU  Service Employees International Union "Wobblies"  Purple Shirt Sturmabteil.

Why is it important that we have a full understanding of Barack Hussein Obama?

Sun Tzu, the ancient Chinese military general and strategist and philosopher warned that in order to understand and withstand a determined enemy, there are two essential necessities. We must know the enemy and we must know ourselves. If we refuse to know either, defeat is inevitable.

We can only hope that Obama, the personification of ammonium carbonate and ammonia water (i.e., "smelling salts"), has finally revived America, and that we are returning to our senses.