Frank Maguire
The ship of state

June 10, 2010
"The East Wind, an interloper in the dominion of Westerly Weather, is an impassive-faced tyrant with a sharp poniard held behind his back for a treacherous stab."
Joseph Conrad, "The Mirror of the Sea" (1906)

"America! America! God mend thine every flaw, Confirm thy soul in self-control, Thy liberty in law"
America the Beautiful 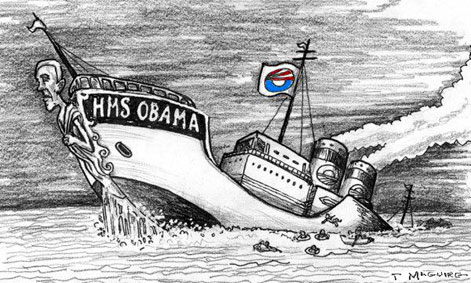 In this twisting sphere, this mortal coil,
The home of the human race,
The winds blow strong and the waters roil,
And all creatures struggle to keep apace.

In this satellite filled with wanting and sate,
Many caught 'twixt corruption and greed,
Strive to keep afloat, in their Ship of State,
And provide for their God-ordained need.

Each passenger who sails in some Bwana's control
Hopes for safety in endless trek,
Suff'ring the seas and tumultuous roll,
They pray that State's Ship will not wreck.

Each confides their Director has wisdom and skill 
But historical reasons to doubt 
When faced with destruction, their "captain" will see
The dangers, and turn about.

But some captains believe, e'en on destruction's brink,
They'll arrive at some un-mapped, safe portal;
And like Ahab they sail, sure that their Ship won't sink,
For they see themselves greater than mortal.

They defy the East Winds and inexorable waves
In their search for Utopian lands,
With not sight to envision abyssal graves 
That the Ship could go down with all hands.

But, there is one Ship called "Columbia,"
Where the people of city and town
Have been Graced with the right to mutiny
Before their Ship goes down.

America, America, God shed His Grace on thee.
No East Wind Assassin's the right to scuttle
Our State Ship of Liberty.