Frank Maguire
Arizonans to the feds: "Keep off our land"

June 28, 2010
Each day I read more commentary about the Arizona Wars. Many repeat the same sentiments and add some variations on the theme. They are valuable in that they keep thousands of America citizens focused on what our Federal government continues to be up to with their threats and harassment. This goes on while Arizona tells the nation that "There is a Constitution from which our Laws are derived, and we are obliged to obey the laws of the land."

There is little that I can offer that is not being well said by others. But there are contributions I can make because I live here in the desert and mountains of southern Arizona in the midst of the fray. I can show you the sights. 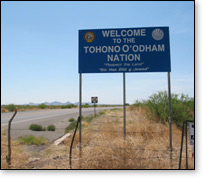 When my wife Helen and I moved in 2006 from Oregon to Arizona City, a small un-incorporated village about 90 miles due north of the active border crossing city of Nogales, we spent much time surveilling the territory. We travelled, often, through the Tohono O'odham Nation land  the second largest "Indian" reservation in the U.S. And we scouted the lovely Arivaca Valley which runs from near Tucson westward toward Boboquivari and the border village of Sasabe, passing through the Buenos Aires National Wildlife Refuge (BANWR).

Though we were sight seeing, my double intent was to find out as much as I could about the incursion across our border of those entering the country illegally. There was no paucity of opportunity, for the area in which Helen and I live is called, by the Border Patrol, the "Pipeline." Sad to say, but to traverse places in our "neighborhood" can be very dangerous. 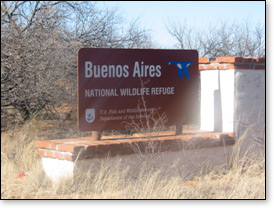 One of our first stops in our search for information was the Buenos Aires National Wildlife Refuge, a very large wildlife area in the Arivaca Valley. At the Ranger Station there I interviewed the resident Ranger. I asked him if it was true that a portion of the Refuge along the border was not open to the public because there was consistent infiltration and activity by the drug-cartel gangs. He verified that such is the reality. 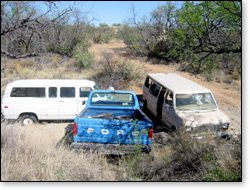 We went into his office and he showed me hundreds of pictures from a cd-rom archive, and he said that I could use them as I found the need. As I viewed the scenes, he repeated that the situation is a real nightmare, and just keeps getting worse, despite the dedicated labor of the Border patrol and the addition of National Guard troops camped down at the Sasabe border. 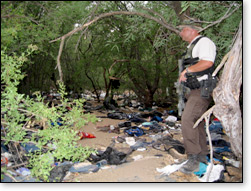 After interviewing the BANWR Ranger, Helen and I drove down to Sasabe, a small village on the U.S. side, and a larger city on the Mexico side. It has been one of the most active cross-over spots for drug and human cargo smugglers, and it is not a healthy spot for an American to cross the border. My friends on the Border Patrol suggested I not cross, but if I insisted, I should definitely return to the U.S. at the same site, otherwise I could disappear and no one would know what might have become of me. I've never crossed. Up to the border I can carry a sidearm and a long-arm, as situations might necessitate. One is not allowed to carry any weapon into Mexico. 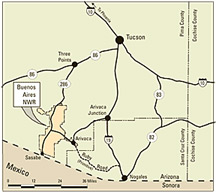 The National Guardsmen with whom I spoke were from places as far away as Rhode Island, North Carolina, and other States. They told me that their main function was to help construct the "fence," and to report to the B.P. any suspicious activities.

I asked them what their "rules of engagement" amounted to. They said that they did not always carry arms, and they were to not engage in any confrontation with any group or individual that had crossed the border. A few of the Guardsmen told me of a recent incident where a number of well-armed insurgents had crossed over and had actually approached them. I asked "What did you do?" They said that they backed off because they are told that their first choice is to avoid all confrontation by exiting the scene. 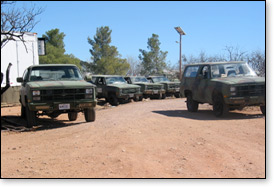 I said "Isn't this dangerous? Doesn't this concern you?" They just looked at one another, grinned, and said, "Well, sure it's dangerous, and sure it concerns us! But that is what is known as our 'rules of engagement.'"

Arizona is under siege by Washington, D.C., by Mexico, by groups like the ACLU and La Raza Unida, et al, ad nauseam. The "Amnesty" moles march through our streets. Most of the "leaders" are political activists  agitprop "crisis" creators. No need for me to go into detail, for others have done an excellent job at defining and describing the enemy.

"Now that I have been proper and polite, I want you to hear what respect I have for you and those who handle and run you. This is as direct as my middle-class South Boston up-bringing requires.

"Do you really think, Mr. Obama, that we in Arizona are all fools...born yesterday? Most of us Arizonans have dealt with the kind of punks who are doing your bidding, and we're not at all intimidated by your threats. American people all over the nation are catching on to your Cloward-Piven-jive-turkey song and dance.

"You and your incompetents schlep around claiming that you've been working with all your might to stop a leak in a pipeline in the Gulf. Yeh, great job! You have the audacity to tell the American people that you can stop a leak that covers the full extent of our nation's borders? With 1,200 National Guardsmen? The Dutch kid at the dike had a better idea than you, and more brains. Why don't you just stay home, try to keep out of mischief, and don't do anything at all. That's the best service you can give. And, start looking for another 'job.'

"Oh, I almost forgot. Where ya gonna hide when your buddy "Blago" starts 'leaking?'"

contains comments from my dear friend Bonnie Swarbrick who has worked at BANWR for many years. For the sake of objectivity her comments taken along with those of Pinal County Sheriff Paul Babeu and others quoted in the Epoch Times article should be considered.

In addition, this is a recent document from BANWR: