July 8, 2010
The following article was originally published in my Liberty Clarion, in 2008. I felt it appropriate, at this time, to republish it. The photos were taken by me in Casa Grande, AZ. Most of those protesting were "amateurs," but the signs were not, and there were persons there who were obviously managing the protest. I spoke with some of the sign holders, and the "managers" stood close by and made it clear that I had better behave myself.

None of the above can be understood without knowledge of the concerted deception that has been actively developing since the early 90's. I found the puzzle to be equivalent to a jigsaw of a black cat with its eyes closed in a pitch black room.

Then I read Jerome Corsi's book The Late Great U.S.A.: The Coming Merger with Mexico and Canada. Corsi is the preeminent investigator of the covert antics of the euphemistic Security and Prosperity Partnership designed to erase national borders and to place American sovereignty into the hands of multinational corporations, international bankers, and non-governmental organization elites (NGO's). If you want to see the whole picture, read Corsi's important book.

Recently, Elvira Arellano, a deported Mexican activist made an astonishing claim. (http://uprisingradio.org/home/?p=1826) She said that Mexico is not responsible for the illegal-worker problem; the United States is the culprit. Know what? From the Mexican perspective she is close to being correct. Why do I assert this? It is an incredible irony.

The United States is a democratic-republic whose law is, fundamentally, the Constitution. The American electors vote for representatives who take an oath to uphold the Constitution. Mexico is a putative democracy that has been controlled by a plutocracy where a single, political entity has ruled. Their government can change their own constitution arbitrarily.

I don't have space to go into great depth; I relate to you what Mexican leaders have told its citizens. The following is from an article by Patrick J. Buchanan, "Mexico is Here." The full text of Buchanan's article is accessible at www.worldnetdaily.com/news.

In August, Mexican President Felipe Calderon gave a national address. He told the people, "Mexico does not end at its borders.... Where there is a Mexican, there is Mexico."

In 1995, their then president Ernesto Zedillo told a Dallas audience, "You are Mexicans, Mexicans who live north of the border." In 1997, Zedillo, addressing a cheering crowd of La Raza Unida (The Race United) militants said, "I have proudly affirmed that the Mexican nation extends beyond the territory enclosed by its borders." 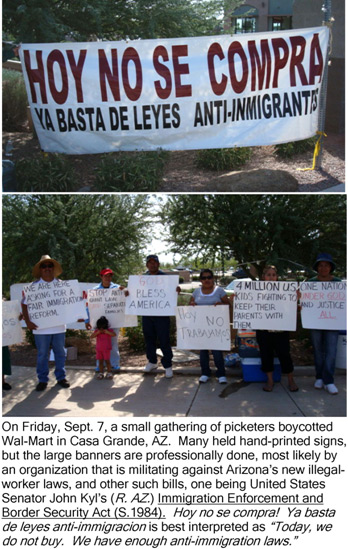 In Madrid, in 2002, former Mexican president Vicente Fox, who is a close friend of our president, stated "Eventually our long-range objective is to establish with the United States...an ensemble of connections and institutions similar to those created by the European Union, with the goal of attending to future themes as important as...the freedom of movement of capital goods, services, and persons. The new framework we wish to construct is inspired in the example of the European Union."

What does this mean to the American citizen? Our borders will no longer exist, our national sovereignty will no longer exist, and our Constitution will have been scrapped. We will be a member of the USACANAMEX North American Union (NAU), run by international bankers, multinational corporations, and hand-picked "governors" not answerable to the American citizens and their elected representatives.

The Mad Hatter rhetoric employed by the secretive NAU cadres was described by Mel Hurtig, Canadian author and publisher who was the elected leader of the National Party of Canada.

"What is sinister about this meeting (held in Banff, Canada, Sept.14-15, 2006) is that it involved high-level government officials (i.e., bureaucrats) and some of the most powerful business leaders of the three countries, and the North American Forum[1] in organizing the meeting, intentionally did not inform the press in any of the three countries. It was clear that the intention was to keep this important meeting about integrating the three countries out of the public eye." (The Late Great U.S.A., chapter four, "Secret Meetings, Formal Councils," pg. 54-55)

This is no fiction, readers. It is current history. Ignore it to your own eventual detriment. I also recommend that you read the U.S. Oath of Allegiance for Naturalization. This oath is mandatory for the new citizen of this nation. Ask yourself if this oath will be necessary for dual-citizen Mexican immigrants.


[1]  "The North American Forum itself is a shadow organization difficult to research and learn about. NAF has no business office and no business address...(it) is nothing more than three cochairs and their extensive network of international contacts." (The Late Great U.S.A., chapt. 4, pg. 55)
© Frank Maguire