Frank Maguire
Fear: The Realist deals with it immediately; the Idealist turns out the light before looking in the mirror

July 16, 2010
"If the Grand Dragon of the Ku Klux Klan wanted to sabotage black academic excellence, he could not find a more effective means to do so than the government school system in most cities." Black Americans and Liberty, by Walter E. Williams 05/05/2010 Human Events

"My black relatives fear I may suffer physical harm from fellow blacks for daring to disagree with our black president. Meanwhile, whites are afraid to speak out against our black president for fear of being called racist. Dear Lord, what is going on in our country?" Lloyd Marcus, "My black dad and Obama" RenewAmerica.com, July 9, 2010

"What has always made the state a hell on earth is precisely that man has tried to make it his heaven." Johann Christian Friedrich Hölderlin, epigram introducing ch.2, "The Great Utopia," of The Road to Serfdom, by F.A. Hayek

"What a country, it makes me want to puke." William Ayers, lifelong friend and associate of Barry Soetoro (Barack Hussein Obama), published in the New York Times one day before the 9/11 attacks.

I'm writing this article on the assumption that many and perhaps most of you who read it have not had the same experience as I, or even if you are old enough to have been personally aware of it, that you might not have been directly involved.

Also, because of the behavior of our Department of Justice Tsar, I am placing emphasis on the persisting varieties of Racism disguised in the garb of "social justice." Even Deadly Nightshade has its attractive blossoms.

I was attending a community college in southern California between the years of 1965 and 1968. Some of the professors there were the best I have ever encountered. The student population  and the faculty population  was diverse, even though the school was in an affluent, coastal city. There were no indications that things upon this campus were going to go to hell in one fell-swoop, even though there was violence across the nation over our Vietnam involvement.

It was my routine to be on campus early. I tried to schedule early classes because I worked nights as a musician. On the first day of assault upon the campus and its students, I was sitting in the cafeteria, reading and having coffee. What occurred was so sudden and violent that everyone, including me, was initially stunned.

One Black student, whom I recognized as a member of the football team, leaped up onto one of the long tables where many students were eating. He walked the length of the table, kicking everyone's food onto the floor or into their laps, and screaming vulgarities at the White students. The profanities were the typical jargon of the so-called "ghetto."

I was astonished. But most astonished that someone  or more than one  did not grab this barbarian, dump him onto his strutting butt, and effectively silence his foul mouth. No one moved. They sat there looking as if they were trying to figure out what they were guilty of, and why they might have been deserving of such treatment.

I felt like I was living on some strange planet where normal reactions  those to which I was accustomed in my middle-class, south Boston Irish neighborhood  were unknown. Not even the biologically normal fight or flight...just incomprehensible immobility! 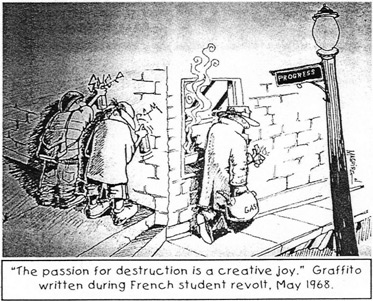 This was day one of the takeover. It was to get much worse, and much less intelligible.

Numerous organizations began to make their presence known. They wore their own identification: Black Panthers; Black Muslims; Black Student Alliance; Students for a Democratic Society (SDS); Weathermen and Weather Underground; Students Against the War; Students for Peace and Freedom; and even Maoists. It seemed that they were acting as a confederacy united, ostensibly, against the U.S. killing of Vietnamese.

One of their first collective actions was to establish, in the middle of the campus, a "Free Speech" area. Here, each day, one group or another's spokesperson would climb upon a platform and rant and rage about the racist, bigoted, hateful, murderous, chauvinist-sexist United States. They declared that our days were numbered, and this was the beginning. They would relate the daily horrors published in their own publications. This was our education session for the day. Propaganda time!

I attended to all of this lunacy, becoming acquainted with the groups and persons involved. I was also making my own plans as to how I would deal with it.

One day another footballer  a very large White fellow  was speechifying. He was vile, ignorantly inarticulate, and threatening. There was a skinny young man, with long stringy blonde hair, standing beside me. I watched him take a small Kodak camera from his pocket, direct it at the day's Community Organizer Propaganda Minister, and take a picture.

Immediately the campus Sturmabteil jumped down from the platform, grabbed the camera, threw the skinny kid onto the ground, held up the camera and crushed it in his hand. "This is what you'll get if you take any pictures," he screamed.

I helped the young man up. He was shaking. Then he spoke. I was surprised. In a thick German accent, and almost tearfully, he said that his parents had come to America because there was freedom to speak, and to have no fear of a government that killed people for speaking out. He asked me if it was against the law to take a picture. I told him that it wasn't. There were others in the group that heard this conversation. I decided that today was my day to move.

I yelled up at the thug and said, "Hey, you (suitably descriptive language)!" He glared down at me. I am 6'1" and weighed, at the time, about 220 lbs. I was as big as he. I continued, "This kid is from Germany and he knows a lot about thugs like you. His country survived you Brown Shirts. You're a coward and a bully. Maybe you should pick on someone your own size?" He just glared. And I glared back. That was it for the time being. This was my first victory.

I had friends on the faculty and some warned me that I was in jeopardy. One said "They might kill you." I shrugged that off. But I was angry. I said "What is wrong with all of you? This is your campus. And what do you do when they come in and wreck it and threaten people? You disappear. Hide away!" Some were definitely ashamed. I found out, later, that the administration had ordered them to not respond to the vandals in any way. If they were ordered out of their classrooms, they simply left.

Every day the Free Speech Brown Shirts spread their propaganda for the day. I had decided to stay up to date on their daily agenda by maintaining contact with the Rumor Control Desk established by the various police agencies. I would get the information early in the morning, type it out, and print hundreds of copies of the actualities that countered the propaganda. Then, I stood at the school's main entrance and passed the information out. No one offered to assist. I didn't solicit help.

One morning one of the administrators approached me and told me that the college president wanted to talk with me. I accompanied him to the office. The president wasted little time telling me that if I didn't stop my activity that I would be suspended. I was contributing to the disruption. I was not at all concerned with threats. I said my piece, forcefully, and told the president that I would cease my efforts. But I did tell him plainly that the damage being done, and the possibilities of someone's being severely injured or killed would rest squarely upon his shoulders.

Meanwhile, an interesting phenomenon was taking place. I moved around the campus quite freely, and the thugs not only didn't bother me, they avoided me. It seemed that their attempts to associate me with some police agency had convinced them that it must be so. I was the safest fellow on the campus, it appeared.

One day former L.A. chief of police Tom Bradley, the first Black mayor of Los Angeles, visited the campus to find out what had caused the students to revolt. Bradley sat on the stage surrounded by members of the Black student groups. He said that he would take questions from those in attendance. When I attempted to ask a question, one of the students (ostensibly...many were not students) whispered into his ear. From then on, Bradley totally disregarded me.

It was not just the school I was attending where the so-called "anti-war" VC supporters were reaping havoc. At L.A. City College, a gang of SDS, et al, ripped the furnishings from class rooms, dumped them in the campus plaza, and set everything on fire.

One young student, who had matriculated at the college after returning from a tour in Vietnam, gathered up a group of veterans. They put the fire out, cleaned things up, and returned most of the furniture back to the classrooms.

A couple of days later, the young vet  the media made a point to describe him as "Jewish"  was beaten so severely that he was hospitalized for weeks. After he recovered, he attempted to return to the college. The administration refused him readmission asserting that he might antagonize the violent militants.

When I had the opportunity, I left the school I had been attending. A faculty friend of mine had decided, also, to leave. He was hired by a college that was brand new: Cal State Dominguez Hills. He felt that the teaching/learning environment would be much better. I enrolled at the college.

The first week I was there, a group of Black students raided the administration offices and demanded that the school provide them with...bongo and conga drums. Reasonable, eh? Of course, the courageous and tolerant administrators turned over the percussion instruments that had been bought and paid for by the tax payers.

Every day the students would surround the school beating upon the drums and chanting that the White employees should either clear out or get what they deserved.

That was in the 1960's. What do we have in the year 2010? We have the hate-filled residue of those cadres administering American colleges, teaching in the Nation's schools, and sitting in elected and appointed position in our Federal, State, County, and City governments. The same people! Many of their names I remember well.

We are at an impasse, citizens. What do we do? Do we continue to run away and hide? Or do we dig in and fight for our Nation? Denying the existence and determination of an enemy guarantees that the enemy will get stronger.