It wasn't very long ago when the librarian at Ohio State University suggested some books to students who were looking for resource material. One book was by David Kupelian, an author and editorialist affiliated with Whistleblower magazine. Another was by David Horowitz, former professor at U. Cal. Berkeley and erstwhile co-publisher of the slick, Leftist magazine Ramparts.

Horowitz reevaluated his ideological leanings and left the Left after one of Ramparts' female employees was allegedly murdered by the Black Panthers, a group Ramparts had championed. He repudiated his former "red diaper" romance with the Left in the excellent book Radical Son. Horowitz now focuses on the take-over of American campuses by the residual, revolutionaries of the 60's and 70's.

In the spirit of glasnost, tolerance, liberalism, and academic freedom, a number of professors at OSU filed harassment charges against the librarian. One whiny prof claimed that he felt threatened. A college professor threatened by ideas! So he pules! Higher education in America! 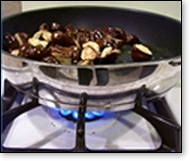 Then there was the Northern Kentucky University professor Sally Jacobsen. This paragon of multicultural tolerance empfohlen, "recommended," that some of her graduate students trash a number of anti-abortion crosses...crosses that had been placed on the campus with the approval of the administration.

Jacobsen, a professor of literature and language, responded, when photographed in flagrante delicto: "I did, outside of class during the break, invite students to express their freedom-of-speech rights to destroy the display if they wished to." Freedom of speech! To destroy! A language professor!

This vituperative vandal made it very clear that any "speech" to which she is opposed should be verboten  de facto and de jure. "Any violence perpetrated against that silly display was minor compared to how I felt when I saw it." What a khaloshesdik khar'∙peh  "nauseating disgrace."

Fortunately, unlike Ohio State, NKU President James Votruba condemned the destruction of the crosses. He said, "I don't buy the claim that destroying property is an act of freedom."

I indulge in the good habit of reading the Davids...Messrs. Kupelian and Horowitz.