July 21, 2010
"What is the source of quarrels and conflicts among you? Is not the source your pleasures that wage war in your members? You lust, and do not have; so you commit murder. You are envious, and cannot obtain: so you fight and quarrel." James 4:1-4

This article is prologue to a series of four that I will start in August on Progressivism in its varieties both past and present.

Pride fails, in my estimation, in that a man can be said to be righteously "proud." The word "pride" is, then, ambivalent. Envy doesn't, in like manner, fail. It can never be said that envy is or can be righteous.

Obsessive envy is the source of all "quarrels...conflicts" and hatred, sometimes reaching the extreme of "murder," to cite James 4. Relative to Pride, when the envious overcome those whom they envy, they achieve a pride that comes with a sense of power.

How is envy manifested politically?

I believe that America is ascending to the "depths" (a deliberate paradox) of civil destruction by following the Existentialist Lodestar, seen in the secular heavens by our newest Gnostics, and that this Lodestar is named Envy.

A couple of years back Hillary Clinton said that the word "liberal" had lost its effectiveness. She advised that the word/concept should be scrapped and that the truly definitive word "Progressive" should fly as the banner of the Democrat-Left.

I, as a classical-liberal, was very pleased that the Left had finally divorced itself from "liberal" and conceded that they are, in fact and deed, illiberal. I am very glad that they have embraced Fascist/Marxism openly under the rubric "Progressive." Thus, they have cleared-up the confusion that had unevenly yoked Liberalism and Statism.

Whereas Liberalism promotes individual liberty, which includes equality of opportunity, Progressivism with its dialectical Change-State ideology always will result in a transient "liberty," with a State imposed "equality" of result.

Swedish scholar/author Claes G. Ryn wrote the introduction to the important book The Myth of Democracy, which was authored by a fellow Swede, Tage Lindbom. Both Ryn and Lindbom had been convinced Social Democrats, and had both been architects of Swedish Social Democracy. Both men, independently, after seeing the secular impact upon Sweden of so-called Social Democracy, became converts against that which they themselves actually had, in their enthusiastic inexperience, produced.

Ryn wrote, "Plebiscitary democracy tries to conform government polity to the wishes of the majority. It assumes that the great mass of people are the best judges of their own interests and that they are even possessed of goodness, as proclaimed by Jean-Jacques Rousseau. Public officials should not make laws in the spirit of independence but be agents of current popular opinion.

"Vesting ultimate authority in the majority, plebiscitary democracy tends to expand and centralize the government and to politicize all social existence.

"Whatever the theory of majoritarianism, in practice it means that politicians cater to the lowest common denominator( i,e, the most noisily militant, dissatisfied and media glamorized ) of popular opinion. Society is subjected to often short-sighted, superficial, and purely partisan wishes"

Ryn goes well beyond this. For example, he compares and contrasts plebiscitary democracy with the "Constitutional popular government" as created by the framers of the American Constitution. (I'll write about this in this series of articles.)

He is also well aware that pragmatic politicians and those who manipulate public opinion  the people's professed needs and wants  actually create the constituencies and factions whom they later direct, in order to stay in power. 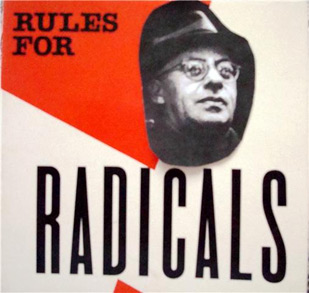 Certainly the political/social gospel of Saul Alinsky, a master student/teacher of how to achieve power and authority, has proselytized his epistles Rules for Radicals and Reveille for Radicals  Little Red Texts for today's Progressives.

In Rules for Radicals, in the chapter "Means and Ends," Alinsky presents his ten rules of "ethics and means." The 10th is most instructive when juxtaposed with these words spoken by Nikolai Lenin: "They have the guns and therefore we are for peace and for reformation through the ballot. When we have the guns then it will be through the bullet."

How did Alinsky put it? "The tenth rule of the ethics of means and ends is that you do what you can with what you have, and clothe it in moral garments."

One last thought I'd like to leave you with: "and clothe it in moral garments." This First commandment of Alinsky originated in the Garden of Eden. Consider those who are now aligned under the NAA_P (I do not include the "C" because to Blacks, the "C" word is denigrated as just a shade less offensive than the "N" word ): the Reverend Sharpton; the Reverend Jackson; the Reverend Farrakhan; the Reverend Wright, et al. And, don't you find it almost mystical that the mouthpiece of the NAA_P is Ben Jealous? The first synonym one encounters for "jealous" is...Envy.

I'll write more about the current stealth-utility of the "C" word in the viciously racialist attacks being made upon the decent citizens who comprise the Tea Party movement.

(envy v. be jealous, desire something which belongs to another)