Frank Maguire
The environment of words: saying what you reeely mean

July 28, 2010
Imagine that you walk into some nondescript lard-ladling eatery in some remote backwater; you sit down and open the menu to find... "Soup day joor, Gopher Guts consumay," main course, "Polecat Pot Pie." Would you abstain from all victuals until the nauseating imagery dissipated?

Yet, if you were in Paris at the Chez Culet, or some other a la mode habitat of haute-cuisine, where a chef named Robespierre Rémoulade concocted some savory sauce that elevated "l'entrails de l'Orangutan" to gastronomic heaven, would you tucker until you were totally tuckered-out?

My point is that image creating words and phrases make an incredible difference, as does cultural context and environment. "French cuisine" creates a sublime imagery while "greasy spoon" conjures up-chucking. The right "sauce," clever phraseology, and snazzy, soigné "packaging" can make almost anything tantalizingly appealing.

Words truly matter. Those who want to reeely appeal to one's d'esprit large sensibilities "sauce-up" their lingo cunningly. Let me give you an example.

I was researching a theological matter and gave my attention to a Christian denomination's use of the word "Reconcile." The alleged purpose of the denominational construct is the reconciliation between the orthodox in the denomination and the adamantly militant "gays," lesbians, and trans-gendered who demand equal recognition and acceptance within the denomination. The GL&TG's insist that they already have God's approval, but they are entitled to being dignified by the "church's" stamp of approval

Now, the problem that I am addressing has to do with the word "reconcile." The Reconciliation factions, who maintain that homosexual behavior is clearly scripturally proscribed as sinful, wants to reconcile with the GLTG folk who excogitate (to devise or invent: to form in the mind by new combinations or applications of ideas or principles) their own interpretations of scripture  i.e. that homosexual behavior is not sinful. I won't go into their guilt-assuaging eisegesis here. I'm essentially concerned with the word "reconcile."

To deal with reconcile we have to presume that there is a "-concile," that must be "re"-ed. That word we find is "conciliate." The origin of conciliate is from "conciliare," which means to "combine or gain...from concilium, i.e., council." So, what are we to infer? It is connoted that there can be a positive combining which results in gain  assembling the combined into a council of consensus.

The denotation  the etymology of the word  of conciliate is to "placate: to pacify; sooth; mollify." Reconcile denotes the wish "to restore to friendship or harmony; to make consistent or congruous; to resolve differences." 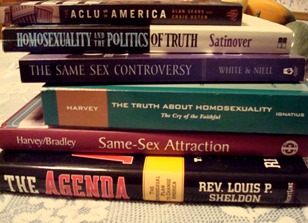 The obvious question begged is how can two groups who have a fundamental disagreement about whether homosexual behavior as given in scripture is proscribed as sinful, or is merely a sexual preference that is every bit as legitimate as heterosexuality ever agree? How do they form a council of conciliation? Upon whom does the burden of reconciliation fall? The word reconciliation becomes, in this context, meaningless. But it does, one must admit, have a nice diversity-tolerant ring to it. An aromatic sauce is ladled over that which is really not digestible.

Perhaps the application of the Hegelian dialectic can settle it? The orthodox thesis is challenged by the GL&TG anti-thesis (or vicey-versa) and a happy synthesis is arrived at. Or do we face some difficulty with this? The problem is as clear as a tocsin that rings out "Beware! The toxin is in the pudding." One side must concede to that which is specifically acceptable to the other.

How does one implacable concilium counsel the other to accept its scriptural exegesis? Does it reeely come down to a question of interpretation? Or is one scriptural position correctly in keeping with scripture and the opposing position in grievous error. What is determined by the idea of Reconciliation?

One can't just shrug-off the problem with "It's reeely just a matter of interpretation." Nothing of substance has been resolved. All that has been done is that an additional problem has been added: the problem of scriptural interpretation. If one surrenders the orthodox understanding of God's Word, that it is Holy, inspired, and inerrant, and becomes reeely reconciled to the idea that it is just a matter of human interpretation, then those who hold to orthodoxy have acquiesced in order to create a unity by placation and mollification.

The fact is that the use of an ambiguous word such as reconciliation has forced the accommodating surrender of orthodoxy. It reminds me of the Gilbert and Sullivan lyric from The Mikado: "And I am right, and you are right, and we are right, toora loora lay." Language has, in the words of Conrad, acted as a "foe of reality," making a life-or-death struggle seem like a friendly fire-side chat among the scholastically aristocratic.

Always, the words we choose to use must be carefully chosen. Words truly are pegs upon which we hang our ideas. We can only make our position clear, and give it any real meaning, when we establish our position with a word that accurately defines our fundamental position. If we don't do that, we are forced to settle for the uselessness of "it's all interpretation." Back to square one, but worse off than when we started.