August 1, 2010
"Therefore, to create Utopia the utopians had to eradicate this individualism, this ugly 'Western malady.'" (this phrase was used by socialist-fascists, Prussian national-socialists, and Bolsheviks as a pejorative against Democratic-Republicanism and free-market stress on freedom of the individual to choose  the basis of the American Declaration of Independence).

"No need for individual 'rights' in these utopias; the state has rights, citizens have duties. None of this liberal British 'individualism' crap allowed here; we will not tolerate any revolt against the species. We are all 'one'; one proletariat, one Volk, and the Party will care for us, the prince will care for us, and we shall never suffer want or fear again. As Tom Joad said, 'We are all part of one big soul.' That's powerful stuff to the empty-headed. Fascism, Environmentalism, and the Third Way, by Bernard Switalski

There are many current "Look Out!" euphemisms around these days that really should be examined critically and not merely accepted because they sound oh-so-good. "Public-Private Cooperation" is one of the linguistic Weapons of Mass Destruction (WMD) that deserves close scrutiny. 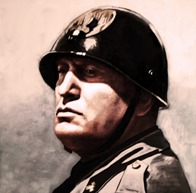 Public-Private (Cooperation) Corporatism is an old idea. It was nationalized by Benito Mussolini's Fascism, internationalized, necessary changes being made (mutatis mutandis) by the communists, fawned over by Progressivist/New Deal politicians and "economists," and under the title of Third Way economics embraced and implanted by Mikhail Gorbachev, British Prime Minister Tony Blair, and President William Jefferson Clinton. Even George Herbert Walker Bush in his first and last inaugural address spoke favorably about the coming "New World Order."

Let's start with Mussolini. For now, imagine yourself in Italy at the time of Mussolini. This will help you to not allow subsequent history to prejudice you against the resilient and malleable political-social-economic system that Mussolini contrived, and that is still proselytized by International-Globalist-Corporationists, Progressivist politicians, Liberation Theologians, and Marxist didacts.

Lord Acton's "power tends to corrupt, and absolute power tends to corrupt absolutely" is only partially rendered. Acton actually proposed that those predisposed to despotism determinedly seek power  that those who crave power pursue absolute power obsessively. A lesser known axiom of Acton, who foreknew the Chicago Way, is "Where you have a concentration of power in a few hands, all too frequently men with the mentality of gangsters get control. History has proven that."

Author and American Ambassador to Italy (1921-1924) Richard Washburn Child, was so impressed with "corporatism" that he wrote in the preface to Mussolini's 1928 autobiography that "it may be shrewdly forecast that no man will exhibit dimensions of permanent greatness equal to Mussolini. . . . The Duce is now the greatest figure of this sphere and time."

Mussolini condemned the idea of individual rights: "The maxim that society exists only for the well-being and freedom of the individuals composing it does not seem to be in conformity with nature's plans...If classical liberalism spells individualism," Mussolini continued, "Fascism spells government." Clearly, though many like to deny it, Fascism is a left wing system  anti-individual, anti classical-liberal, and Statist.

Fascist corporatism, and other forms of Statist socialism, relegates citizens to the function of "subjects." The essence of fascism, therefore, is that government should be the master, not the servant, of the people. The perpetual notion of persons with this mind-set is that the regulation and regimentation of American society is best controlled by cadres of planners and managers, a self-determined elite, and never entrusted to the individual who might make individual choices as opposed to collective, communitarian choices.

Here, in America 2010, in our descent back to Progressivism, we see the Left's hatred of the middle-class moral/ethical values encompassed in our Declaration of Independence. (http://article.nationalreview.com/438670/why-the-left-hates-conservatives/dennis-prager) The target of the Left is the middle-class whom the Left defines as "bourgeois reactionaries"  e.g., the Tea Party patriots and those who defend the Constitutional confederation of States and the sovereignty of our Nation.

In his important book on NAZI-Statism, The Social History of the Third Reich: 1933-1945, Pierre Ayçoberry, professor emeritus of contemporary history at the University of Human Sciences in Strasbourg, France, provides us a connection between the era of Fascist/NAZI/Marxist Statism and today's Progressivist Statism.

In "The Victims: The Discontented and Those Who Resisted," Ayçoberry wrote, "Just as eugenics led to murder, such pedagogy obviously included repression. Even political peccadillos, verbal protestations, disrespectful jokes, etc., were deemed worthy of Special Courts, and by March 1933 these were set up in every regional capital. Rights to defense were limited and verdicts were fixed in a law tellingly known as the 'Law against underhanded attacks on the State and the Party.'"

In Progressivist America, 2010, our government calls these "Hate Crimes."