August 7, 2010
For those of you who might have missed Helen's guest editorial posted June 25, 2010, entitled "Guest article from an American who is Hispanic," I reintroduce Helen to you. "My wife Helen is full-blooded Hispanic. She was born in the mining town of Superior, Arizona to Ernest Estevez and Josephine Estevez de Guzman. She is very proud of her heritage and grateful to be a citizen of the United States."

What Ms. Amparano-Gamez states here is absolutely incredible. It no doubt represents the attitude of the Mexican government, and there is every reason to believe that it reveals what has been conspiring between Mexico and our own government for a very long time and what deceit has been practiced against the citizenry of this Nation. Frank Maguire


My husband Frank and I frequently travel Interstate 10, the major highway between Phoenix and Tucson, Arizona. Lately, we have noticed, with increasing frequency, vehicles of every description, with Mexican license plates, loaded to overflowing with household possessions, heading south. 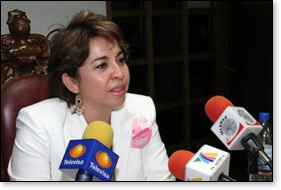 Rep. Leticia Amparano-Gamez, a Mexican official, from the state of Sonora, has complained about Mexicans returning from the United States.

'How can Arizona pass a law like this?' asked Amparano-Gamez. The Mexican state of Sonora is made up mostly of small towns and, according to the Tucson Citizen, the Sonoran official said "the small towns cannot handle the demand for housing, jobs and schools it will face as illegal Mexican workers return to their home towns."

"Mexico is not prepared for this, for the tremendous problems," as more and more Mexicans working in Arizona and sending money to their families return to hometowns in Sonora without jobs, she said.

Could it be that Rep. Gamez is concerned that Mexico's 3rd greatest "revenue" source (after oil and tourism) is the 6-8 billions of dollars sent "home" to Mexico by illegal aliens in America, will be depleted? (Note: an estimate printed in the Brownsville Herald estimated the amount of dollars going south in 2006 at $45 Billion, which was up from an estimated $30 Billion in 2004.)

All I can say, in response to Rep. Gamez, is "hmmm"  Mexico is a country rich in natural resources, along with beautiful cities and magnificent coastlines. Agriculture, tourism, mining and oil industries could certainly be expanded to the great benefit of Mexico's citizens. And, with a workforce of willing and able workers, now returning to their homeland in record numbers, the task of building a thriving economy should be greatly facilitated.