August 15, 2010
"The socialists believe in two things which are absolutely different and perhaps even contradictory: freedom and organization." The Era of Tyrannies: Essays on Socialism and War, by Élie Halévy (New York University Press 1966) 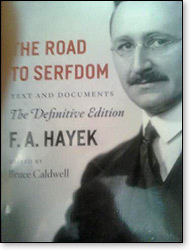 "Before we can progress with our main problem, an obstacle has yet to be surmounted. A confusion largely responsible for the way in which we are drifting into things which nobody wants should be cleared up. This confusion concerns nothing less than the concept of socialism itself.

"It may mean, and is often used to describe, merely the ideals of social justice, greater equality, and security, which are the ultimate aims of socialism. But it means also the particular methods by which most socialists hope to attain these ends which many competent people regard as the only methods by which they can be fully and quickly attained.

"In this sense socialism means the abolition of private enterprise, of private ownership of the means of production, and the creation of a system of 'planned economy' in which the entrepreneur working for profit is replaced by a central planning body." F.A. Hayek, The Road to Serfdom, Individualism and Collectivism, chapter 3

The U.S. Constitution was written by individuals who believed in the classical liberal philosophy of individual rights and sought to protect those rights from governmental encroachment. But fascist/collectivist Statism  now known as Third Way  philosophy has been persistently influential; the Constitution has been an open target for those who advocate mandated communitarianism. They often refer to the Constitution as a "living document," which means, as did the Soviet Constitution, that it is flexible, and becomes what those in power dictate it to be at the moment. There can be little doubt that the judiciary in America has been used to by-pass elected representatives, and thus the voting citizenry.

One behavior in common amongst those obsessed with planning is that they are self-anointed visionaries and perfectionists. They hate the mess that is the democratic free-market. Like the Prussians of old, these autocrats command Order that is imposed by them. They are of the enjoined-consensus mentality  the unity of aim autocrats. Corporatist (Fascist) planning, according to Mussolini adviser Fausto Pitigliani, would give government intervention in the Italian economy a certain "unity of aim," as defined by the government planners.

What this means is "no free-market, entrepreneurial, mess-up-the-urban-landscape types allowed...unless you're part of the syndicate of believers." And, the syndicate of "Too Big to Fail" believers are the confederation of Survivalist/Sycophants  Public-Private corporatists  syndicated to do their own thing with the taxpayer's money.

One is led to infer that these Third Wayers will explain to us what "coherent" is; we, you see, the great "untidy," are incoherent: Mussolini redux, but wearing his Third Way uniform.

Government-business partnerships: A third defining characteristic of economic fascism is that private property and business ownership are permitted, but are in reality controlled by government through a business-government "partnership."

In Mussolini's Italy, Public-Private Cooperation meant that "fascist confederations" were "coordinated" by a network of government planning agencies called "corporations" (Under the Third Way Public-Private Corporatism these "corporations" are called "non-governmental organizations," or QUANGOS in Great Britain) and had the power to "issue regulations of a compulsory character."

Government-orchestrated unity-of-aim, enjoined-consensus was necessary because 'the principle of private initiative' could only be useful 'in the service of the national interest' as defined by government bureaucrats.

It was dictated that Government and the private sector had to work cooperatively. Economic success would depend to a high degree on coordination, collaboration, and careful strategic choice guided by government. Advocate of such a chimerical (i.e., "existing only as the product of unchecked imagination; a fantastically visionary, improbable scheme") system, economist Lawrence Chimerine reported that what is needed is "more teamwork" through "public-private partnerships among government, business and academia." His report calls for "national goals and targets" set by government planners who will devise a "comprehensive investment strategy" that will only permit "productive" investment, as defined by government, to take place.

MERCANTILISM AND PROTECTIONISM:. Gaetano Salvemini criticized, in 1936, that under corporatism, "it is the...taxpayer, who has become responsible to private enterprise. In Fascist Italy the (taxpayer) pays for the blunders of private enterprise." As long as business was good, Salvemini wrote, "profit remained to private initiative." But when the depression came, "the government added the loss to the taxpayer's burden."

The Italian corporative state, The Economist editorialized on July 27, 1935, "only amounts to the establishment of a new and costly bureaucracy from which those industrialists who can spend the necessary amount, can obtain almost anything they want, and put into practice the worst kind of monopolistic practices at the expense of the little fellow who is squeezed out in the process." Corporatism, in other words, was a massive system of corporate welfare. "Three-quarters of the Italian economic system," Mussolini boasted in 1934, "had been subsidized by government."

From an economic perspective, fascism meant (and means) an interventionist industrial policy, mercantilism, protectionism, and an ideology that makes the individual subservient to the state. The whole idea behind collectivism in general and fascism in particular is to make citizens subservient to the state and to place power over resource allocation in the hands of a small elite. As stated blatantly by the American fascist economist Lawrence Dennis, fascism "does not accept the liberal dogmas as to the sovereignty of the consumer or trader in the free market.... it does not allow that market freedom, and the opportunity to make competitive profits, are rights of the individual." Such decisions should be made by a "dominant class" he labeled "the elite."

Some of the above quoted material is from Economic Fascism, Thomas J. DiLorenzo http://www.banned-books.com/truth-seeker/1994archive/121_3/ts213l.html

The Road to Serfdom, by F.A. Hayek, (original text, 1944, University of Chicago press)