September 8, 2010
"Better to not be a hero than to work oneself up into heroism by shouting lies."
George Santayana, Dialogues in Limbo (1925)

"Our character is what we do when we think no one is looking." H. Jackson Brown, Jr.

"What should we remember on Martin Luther King Day? In his 'I Have a Dream' speech Dr. King said: 'I have a dream that my four children will one day live in a nation where they will not be judged by the color of their skin but by the content of their character.' This statement means that in judging other men, skin color should be ignored  that it should not be a factor in evaluating their competence or moral stature." Capitalism Magazine, 15 January 2008

After the attack by Jesse Jackson, et al, upon Arizona for our having passed SB-1070, I decided to reacquaint myself with the sordid details of race-baiter Jackson's überragen ascent to infamy and fortune-by-extortion. Before I can concentrate specifically upon Jackson, there is related and relevant history that must be prologue. Let me to back a few years to Arizona's history as a state with a populace that lives by the axiom "We won't go along just to get along." Back to the origin of Martin Luther King Day!

When the first referenda were presented to the voters of Arizona, the people voted "No!" Though the voters had a variety of reasons why they didn't favor a paid holiday to honor King, including his history which raised some questions, ironically, about the content of Rev. King's character, Arizona came under concerted attack by numerous racialist organizations, and East and West "Left Coast" white-man's- burden, noblesse oblige types.

Prior to the vote, Arizonans were threatened with everything from virtual racial rebellion to the loss of any participation in the NFL Super Bowl by NFL Commissioner Paul Tagliabue.

A historical reality that must be remembered is that Arizona is the only state that gave its citizens a choice. All other states merely imposed a "paid" holiday by political dictate. It is reasonable that a citizen should be considered when it is his/her money that will be paying the cost of the holiday. Arizonans also saw the paradox that it was, essentially, a racial focus that motivated many of the proponents of the holiday, but it was Arizonans who were being declared to be the racists.

In a recent commentary in that paragon of Progressivist virtue, the Boston Globe (May 10, 2010), the writer juxtaposes Arizona's rejection of a paid holiday for Martin Luther King with the passage of the anti-illegal immigrant law SB-1070. I quote from the commentary: "In recommending the pulling of the 1993 Super Bowl, NFL Commissioner Paul Tagliabue, representing a league where 60% of the athletes were African-American, said 'Many of our players regard Martin Luther King as a role model. We're encouraging them to be role models, and I think it would be unfair to ask them to go play their championship game in that state.'"

Consider the presumptions in Tagliabue's avuncular platitudes. First, the racial issue is presented as paramount. Second, the players  all of them, including the alleged 60% African-Americans and the 40% "other" were not polled. Tagliabue's bromidic assumption was that all the African-Americans had to be, by virtue of their color, in agreement with his obtrusive pontifications. What the 40% Others  who were also supposed to be represented by the NFL management  thought about being included in a virtual ultimatum against the citizens of Arizona, we heard nothing.

Further, the notoriously Left-wing Globe (as a Bostonian I lived with their partisan, provincial carping for many years) makes a recommendation, in its ignorance, about how the "racist" Arizonan must be penalized for its passage of SB-1070.

"Phoenix is scheduled to host the (MLB) All-Star Game. Baseball Commissioner Bud Selig should tell Arizona that the league will move the game if the law is not overturned. The sport has a big footprint in Arizona; half of all major league teams call Arizona home for spring training. Since the law singles out the nearly 30% of the players who are Latino, Major League Baseball...can use its prestige to help knock (Arizona's retrograde* [see Footnote] law)...out of the park."

The Boston Globe's intrusive ex cathedra again employs racialism. Its arrant presumptuousness is indicative of the arrogant moralistic posturing of the Left. Arizona's SB-1070 deals entirely with those who illegally enter the U.S. from Mexico in defiance of Federal and State law. In reality, far fewer than 30% of the "Latino" players are from Mexico (and none, that I know-of, crept furtively across the border). Many "Latino" players come from the Dominican Republic, Puerto Rico, Cuba, Venezuela, and Central America. The fraudulent impression that all the Latino players are in favor of illegal entry into the United States by Mexicans is an unwarranted, unproven assumption. In fact, you can be sure no one even asked their opinion. What did it matter? They were merely an available utility. In such matters they are expected to remain silent when the Oracle speaks.

Perhaps some will see my introduction to a revelation about the real Jesse Jackson to be irrelevant. I hope, in the series of articles I will be submitting to RenewAmerica.com to show how very relevant racist strategy has been in the apotheosis of Jesse Jackson. 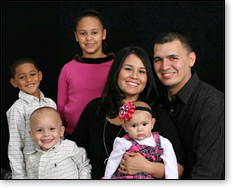 The next in my series requires that I include Jackson's association with M.L. King. I have no intention of demeaning Rev. King, but to simply revisit historical realities. Judiciously, not, God forbid Juridically!

This photo is of my beloved grandson William Bribiescas, Jr., his precious wife Tiana, and our beautiful great-grandchildren Braylon, Jada, Julian, and baby Aaliyah.

Footnote: The Globe's use of the word "retrograde" is very telling. Retrograde: adj. retreating, moving backward; moving in a direction opposite the usual direction; moving in a direction opposite to that of the Earth around the sun (Astronomy); appearing to move from east to west (Astronomy); worsening, deteriorating. In immigration context, the Globe takes the position that preventing illegals from entering the United States is an anti-Progressive. So much for the law and so much for the Constitution. Progressives are allowed to amend the Constitution and defy the law because they are moving forward...in the direction Progressives wish to make "usual."