September 13, 2010
"It's easier to swoon in pious dreams/Than to do good action." Gotthold Emphraim Lessing, Nathan the Wise (1779)

I chose to interrupt my "political" series, which enervatingly deals with the seedy side of human nature, with "Storgé..." so that I could interject a joyful perspective  a boost in morale and hope: "Hope deferred makes the heart sick." Proverbs 13:12.

On August 31st, my loving, charitable, unselfish sister Anne Marie Beauchamp, née Maguire, left her physical body and went to be with her Lord and Savior. The beautiful service at St. Joseph's Church in St. Johns, MI was not at all funereal. It was a joyous celebration of tears and smiles  even some laughs that perfectly balanced the eulogies. I'm certain my "little" sister, a talented dancer, enjoyed the words spoken in memoriam, and the music provided by family members. I had anticipated a joyous celebration of Anne's life. There were some additional, unanticipated joys of which I, here, write.

While I was in Atlanta, GA, waiting for the flight that would take me to Flint, MI, I was doing that which I typically do. I was observing persons, fellow travelers, whose eventual destinies and geographical destinations were unknown. One can tell much from their affect and body language. I am a natural student  or, perhaps un-natural  of persons.

There were two attractive ladies seated across from me. One of the persons was younger than the other. I watched them with pleasure. They were joyful in their association. The younger of the two was wearing a tee-shirt upon which was printed "PURE."

Judging that they would not object to my addressing them, I said to the younger, "Excuse me! I just wanted to say that it is wonderful to see someone who is not ashamed to being thought of as 'pure.'" I pointed to the shirt. The lovely young woman smiled, and held her shirt out in display. Her smile was lovely. She even laughed. As did the lady whom I learned is the mother of the younger. She, also, blessed me with a delightful smile.

I asked their destination. They said that they were going home to Los Angeles. I could tell by a vestigial accent that they were not native to L.A. I was curious about their original home. So, I said, "You have an eastern accent...sounds like New York." They told me that they were from Brooklyn, N.Y.

I responded that I had been a professional musician, and that I knew a tune called "Give Me the Moon over Brooklyn," and asked if they had ever heard it. They had not. So I said, "Then let me sing it to you." The song goes back to the 1940's, prior, I determined, to the birth of either of them.

They listened, as did those sitting in proximity. I sang it in Brooklynese, emphasizing words like "lorng," for "long," and "wawrk," for "walk."

The younger said "That's great. You should be on television." I told her I had been, years ago. She added that the reason she had moved to L.A. was to get into show business. I asked her if she had succeeded. She said that she had. I congratulated her, asking if she is currently performing.

She reached into her brief-case and took out a promo-graphic. She gave it to me. "Wow!" I said. "Hubba, hubba!" This "tickled" her mother. She said, "Hubba, Hubba! The last person I heard say that was 'Ralph Cramden'...I don't remember his name." I told her "Jackie Gleason." "That's it," she said. 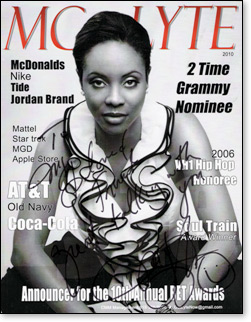 The younger told me that the promo-graphic was for me. I asked her to autograph it. She said "Sure!" I then, jokingly, said "Could you autograph it 'to my beloved Frank?' " As she started to write, I said "I'm only kidding." "Too late!" she smiled. I quipped "Oh, oh! How'll I explain this to my wife!"

After returning home to Arizona, I found her bio. Meeting this talented young lady and her mother was serendipitous. Our music preferences, the outcroppings of culture, would clash, but what is truly important, doesn't.

Entering the music industry in the early 1980s, Grammy nominated female rap artist MC Lyte quickly gained notice thanks to her critically acclaimed albums "Lyte as a Rock" (1988) and "Eyes on This" (1989), which produced the chart topping rap singles "Paper Thin" and "Cha Cha Cha." After enjoying another hit with "Poor Georgie" from the 1991 album "Act Like You Know," Lyte experienced a big breakthrough with the Grammy nominated track "Ruffneck" (1993), which made her the first female hip hop artist to receive a gold record. She had her next gold single three years later with the Soul Train Award winning "Keep On, Keepin' On" (1996), a duet she sang with Xscape. She also had a rap hit with "Cold Rock a Party" (1996), featuring Missy Elliott. "Da Undaground Heat, Vol. 1" (2003), a comeback album after "Seven & Seven" (1998) and "The Very Best of MC Lyte" (2001) that spawned the U.K. hit single "Ride Wit Me," which brought Lyte her second Grammy nomination. In addition to releasing albums, Lyte has also recorded soundtracks for several films, including "Mo'Money" (1992), "Sunset Park" (1996) and "The Fighting Temptations" (2003).

Lana M. Moorer, professionally known as MC Lyte, was born on October 11, 1971, in Queens, New York. She was raised in Brooklyn, New York. Her older brothers are Kirk "Milk Dee" Robinson and DJ Nat "Gizmo" Robinson, who recorded under the name of Audio Two and are probably best known for their first hit, the classic "Top Billin'."


I had another fortuitous experience as I sat at Border's Book Store in Flint, MI. In a future article, I will tell you about "Big Al" Alphonso Foster which allowed me to share that affection which C. S. Lewis identified as "storgé" in his book The Four Loves.