October 1, 2010
"And the peace of God, which transcends all understanding, will guard your hearts and your minds in Christ Jesus." (Philippians 4:7)

"Disillusionment means having no more misconceptions, false impressions, and false judgments in life....Refusing to be disillusioned is the cause of much of the suffering of human life." "The Teaching of Disillusionment," Oswald Chambers, My Utmost for His Highest

"The Liberal...assumes...that the cultural conflict is one which can, like political conflict, be adjusted by compromise, or like the religious conflict, be resolved by tolerance...." T. S. Eliot, "The Dark Side of the Moon," essay — 1946

"The alternative to the existing world order can only emerge as a result of a new, human dimension of progress...a revolution of the mind...a new way of thinking..." Mikhail Gorbachev, State of the World Forum, 1996

Mark 7:6 "Isaiah prophesied correctly about you hypocrites, as it is written: 'This people honors me with their lips, but their heart is far from me. 7:7 They worship me in vain, teaching as doctrine the commandments of men."

John 16:33 "These things I have spoken unto you, that in me ye might have peace. In the world ye shall have tribulation: but be of good cheer; I have overcome the world." 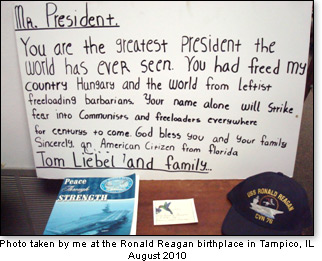 Peace! It is fragile. But, what is It? The absence of the deployment of weapons by antagonists? A pro-tem compact between persons or nations who have no illusions about the potential for treachery in each other? A Pax Romana, or Nazi gleichschaltung — "forced compliance?" Submissive surrender to a — national or global — Politburo, a Reichstag, or even a secular "democratic-comintern that functions more as a civil religion than as what

Jefferson defined...inalienable rights of life, liberty and the pursuit (note: not a politically mandated and managed "attainment") of happiness, endowed by the Creator to all of His human creation?

The Religious Left (R.L.) indulges in the "seamless garment" argument, i.e., that one cannot be ethically consistent if one's "garment" is not composed of an integrated fabric that includes opposition to war and capital punishment. Without belaboring the irony (that would be humorous under less serious circumstances) that the R.L. hoists itself upon its own petard, I will attempt to show that the Peace desired by the Right is the consistently ethical and traditional position of Judaeo-Christianity, and the delusional "peace" of the R.L. — actually, "pacification" — is not at all Scriptural, but is imaginary...an oft failed and reworked idealism that produces dystopia, not utopia.

The strategy of the R.L. is to convince that they have a more compassionate awareness of "the family," pontificating that the Christian Right is myopically bogged-down in anti-abortion and anti-homosexual divisiveness. They traduce the Right for defending the concept of "just war," and for its defense of capital punishment for the crime of pre-meditated and aggravated murder.

What do we know about that which the R.L. advocates? We know it favors an elastic Constitution, with "progressivist" judges who arbitrarily add to and subtract from the founders' creation. They call their faith in judges and stare decisis "evolutionary progress." We know it continues in its goal of supervening the Constitution, working to adjust it to international law.

The R.L. is consistent in its faith by denying the teaching of Jesus that Scripture is the transcendent and eternal word of God — infallible; eternal; inerrant. Their clerics do not practice historical exegesis (letting the Bible's context define itself), but they eisegete (diminish God's Word vis à vis the "reasonable and enlightened" morés of the times).

While declaring itself Christian, the R.L. denies the historical Old Testament which, among other things, unequivocally details Man natural proclivity for war. There is nothing in the O.T. that foretells man's capability, absent God, of securing earthly peace.

Further, the R.L. in proselytizing for globalistic-peace and religious equivalency, that would surrender both national sovereignty and essential Christianity, they display no regard for Jesus' foretelling of that which is preordained: Matthew 24:3 "As he was sitting on the Mount of Olives, his disciples came to him privately and said, 'Tell us, when will these things happen? And what will be the sign of your coming and of the end of the age?' 24:4 Jesus answered them, 'Watch out that no one misleads you. 24:5 For many will come in my name, saying, "I am the Christ," and they will mislead many. 24:6 You will hear of wars and rumors of wars. Make sure that you are not alarmed, for this must happen, but the end is still to come. 24:7 For nation will rise up in arms against nation, and kingdom against kingdom. And there will be famines and earthquakes in various places. 24:8 All these things are the beginning of birth pains.'"

For the edification of the R.L. and its syncretist/panentheist/atheist acolytes, a Nation is a sovereign, autonomous, geo-political actuality. In the historical, orthodox, Judaeo-Christian canon, Armageddon will involve Nations, not a gaggle of gauche, guru-guided-groups that cant mystical obbligatos from the holy of holies of their terra incognita.

footnote: To understand Jesus' metaphoric use of the word "sword" in the New Testament, and to contrast it with the Islamic "Sura (chapter 8:12) of the Sword," access "The Sword of Jesus and the Sword of Muhammad," by James M. Arlandson: