Frank Maguire
"I shall have no false gods before me"

October 13, 2010
Matthew 4:8-10 Again, the devil took him to a very high mountain and showed him all the kingdoms of the world and their splendor. 9"All this I will give you," he said, "if you will bow down and worship me."

10Jesus said to him, "Away from me, Satan! For it is written: 'Worship the Lord your God, and serve him only.'"

As I read the wisdom and experience of those aligned with the values of our Constitutional Republic, I get very mixed emotions. I do not get the feeling that most of our own are aware of the nature of the war we are in.

In a few cases, I can tell that there has been progress made in identifying Barack Hussein Obama — who he really is, who his handlers are, and what they desire in their sinister scheming. Even this, however, has taken an unreasonably long time.

Why? Because we no longer know who we are, and we don't recognize the real enemy. Ostensibly, the war is "political." We surely must know by now that winning a political war is a temporal, and sometimes even a Pyrrhic victory. Why "Pyrrhic?" Because we think we've won something of lasting substance. Our courageous Founders knew much better than to put their faith in politics and political factions/parties. 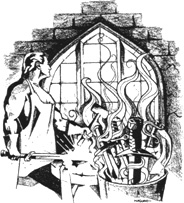 The war in which we are encumbered is a Spiritual War. The weapons that will see us to actual victory are spiritual weapons. Alas, I don't see that most Americans understand this, and even many who profess the Christian faith don't want to admit it and face that which must be done to turn back to God's inerrant Word.

Years ago, when Helen and I were in England during a Remembrance Day, I came up with what I thought a verbum sat sapienti. A "Word to the Wise!" My appraisal of the Brits was, at that time (it has since radically changed) that although Britannia surrendered its hegemony, magnanimously and voluntarily in most cases, the Sasanach, the ancient word used by the Irish for those of English heritage, still maintained a mien of superiority. They appeared to me to be capable of retaking the world and rebuilding the empire, and, once again "Ruling the Waves" if they had the desire, and energy, to do so.

I wrote, jocularly, "Where there is Tea, there is hope." I wrote this because I had concluded, years before, that it was the Tea Time respite amidst NAZI V-2s, etc, that united the Brits in a way that elevated their hopes and assurances that their beloved nation would prevail.

Forwarding to America, 2010, my jocular axiom has, it seems, crossed the "pond." Once again, Tea has imparted hopes and assurances. But!

But, in visiting Britain in 2010, what do we find. In WW-II, tea, superior weaponry, and, essentially, a determination grounded in Christian faith, defeated the Axis; the Aryan gods and the Kami sun-gods were overcome.

But now, "Rule Britannia" has given way to "Rue Britannia." Britannia, that "England," which "never, never, never shall be slaves" has enslaved itself. The once great nation has lost sight of the enemy, and forgotten the Faith of their fathers which saved them from the enemies who fought in the name of false gods.

Dear Lord, keep us here in America from relying upon false gods.

We've had a life of ups and downs,
And skies both stormy and fair.
With days of smiles and some of frowns,
And cupboards full or bare.

There've been rising tides that lifted us,
And ebb tide's lowest wane:
With rip tides that have drifted us
'cross life's tumultuous main.

With hope, we've seen red skies at night,
With fear, red skies at dawn;
But by God's mercy and God's might,
Emmanuel was born.

Grace, through it all we've weathered the blow,
And found our havens fair:
While trials have taught us what we know,
That our Captain's always there.