Given the proliferation of T's and A voyeurism radiating throughout the USA where "good feelings" has been given a new, euphemistic connotation by Die Vereinigten Saaten (once known as "America the Beautiful...land of the free and home of the brave"), I thought it appropriate to submit this article which I wrote in 2005 after reading about Germany's affirming the Orwell-augured utilitarian-language by its precise and practical refining of "human resources." No longer "personnel!" "Human resources!" Remember the "Personnel Department" folks? Well, we can all forget that designation which provided workers with a bit of human dignity. Always better to be thought of as a person rather than a lump of coal that is resourced-out when reduced to an ash.

In an article by Clare Chapman in the British paper the London Telegraph (Jan. 30, 2005), the writer describes the association between socialist statism and moral degeneration. "Prostitution was legalized (in Germany) just over two years ago; brothel owners — who must pay taxes and employee health insurance — were granted access to official databases of jobseekers.

"(One) 25 year old waitress who turned down a job providing 'sexual services' at a brothel in Berlin faces possible cuts in her unemployment benefits under (the new law).

"The waitress, an unemployed information technology specialist," had taken the waitress job to make ends meet. When she applied at a job centre (sic), she was told that the law required that she apply for the job at the brothel that solicited her employment.

Chapman writes, "The government had considered making brothels an exception on moral grounds, but decided that it would be too difficult to distinguish (brothels) from bars. When the (woman) looked into suing the job centre, she found out that it had not broken the law. (She was told that) job centers that refuse to penalise (sic) people who turn down a job, by cutting their benefits, face legal action from the potential employer.... A job center that refuses to accept the (legal) advertisements can be sued by the brothel owner." 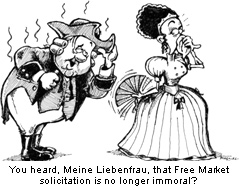 Commenting on the new law, attorney Merchthild Garweg said, "There is nothing in the law to stop women from being sent into the sex industry.... The new regulations say that working in the sex industry is not immoral anymore, and so jobs cannot be turned down without a risk to benefits."

One brothel owner, Tatiana Ulyanova, who owns a brothel in central Berlin, complained, "Why shouldn't I look for employees through the job centre when I pay my taxes just like anybody else."

Socialism matures! The State is the pimp. It's all about das Geldvermögen...taxation. Americans, this is not some futuristic Clockwork Orange. It's now.

"Ethics, too, are nothing but reverence for life. That is what gives me the fundamental principle of morality, namely, that good consists in maintaining, promoting, and enhancing life, and that destroying, injuring, and limiting life are evil."