January 9, 2011
Guest Editorial: Mark Ellis writes for The Northwest Connection (NWC) in Troutdale, OR — East Multnomah County — as well as other publications. About 10 years ago, an industrious and intelligent young lady, Jolinn Kampstra decided that it was time to contend with the Portland (Multnomah County) political perpetuation of the ideologically-Left status quo ante. The demographic of E. Multnomah County is more traditional family and conservative. So, NWC was born! 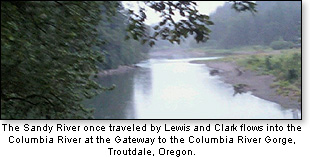 Kampstra, Ellis, and other fine writers of diverse, informative and entertaining material produce each month what I believe is the finest publication of its genre in America. And, NWC is making a difference.

I have submitted this commentary by Ellis because it is representative of what will be going on in every American community for a long time as we try to regain our moral and political sanity and economic stability. If this can be accomplished in Oregon it can be accomplished almost anywhere.

Kampstra and her devoted staff proceed one citizen, one community at a time.

It is not a bridge to nowhere, but it is a bridge in danger of falling hundreds of feet into the Willamette River. Chunks of concrete are routinely seen dislodging from Portland's 74 year old Sellwood Bridge and splashing near salmon fishing boats below. Engineers have given the bridge a 2 out of a possible 100 safety rating, and references to the epic 2007 fail of the I-35 Mississippi River Bridge in Minneapolis, MN are in the air.

Few in the Metro Area deny that the bridge needs to be replaced, but, as so often the case in economically strapped times, disagreement about how to pay for it has sparked a feud between two counties, and inspired local Tea Party activists to enjoin the debate.

The bridge sits squarely in the city of Portland and is owned by Multnomah County, two governmental entities which have garnered a reputation for profligate spending on projects like the limited-use Aerial Tram, built with millions of taxpayer dollars even as vital infrastructure crumbled and private sector interests fled what is perceived as an unfriendly business climate.

Proponents of a shared funding arrangement between the counties point to studies which suggest that 70% of the traffic over the Sellwood originates and/or ends in neighboring Clackamas County. They backed a proposal which mandates that Clackamas kick in 22 million of the projected 330 million total replacement cost. The funding would come in the form of a $5 annual fee attached to biannual vehicle licensing fees.

On December 9 of last year the Clackamas County Board of Commissioners approved the fee hike, but not before a spate of eleventh hour public meetings drew emotional public testimony.

Those in favor of the proposal included representatives from trade unions whose members stand to gain jobs from the bridge building project, various Chambers of Commerce and other business interests who see a new bridge as a vital economic link, and urban cyclists who cross the bridge in its present state at their own peril. The Sellwood is a narrow, two-lane crossing, with only a raised swath of sidewalk for pedestrians and cyclists.

Opposition spearheaded by Tea Party groups such as Americans for Prosperity and the 9/12 Project highlighted what they see as a dangerous precedent set by intra-county funding arrangements. They raised the specter of a slippery slope by which ultra-liberal Multnomah County could cannibalize the coffers of more economically prudent counties.

Trust in governmental assertions about the 5$ fee surfaced at the meetings, with many citizens voicing concern about calculations which show the fee could grow incrementally and reach as high as $40 per vehicle. Others worried that the funds would be diverted to other projects, and would not sunset after the bridge was complete.

Many Clackamas residents were upset that the proposed new bridge would still only provide two lanes for vehicle traffic, while expanding the surface area for pedestrians and cyclists.

Speakers in favor of the proposal warned that Portland could be on the precipice of a "Minnesota Moment." One talked about how he "resented" the mobilization of the Tea Partiers, and was answered by a citizen who voiced his own resentment of the Multnomah residents who came begging for Clackamas money.

One proponent laid a five dollar bill on the table, offering it up as his first installment.

Over 30,000 vehicles travel over the precarious Sellwood every day. Other funding partners for the project are the City of Portland, the Oregon Department of Transportation, and the Federal Highway Administration

Chairman of the Clackamas County Republican Party John Lee minced no words in his time at the microphone, affirming that if the fee was approved a referral to county voters was inevitable. "Don't go there," he warned.

The Board ended up going there anyway, after promising to take under advisement concerns about fee-creep, perpetuation of the fee after the bridge project is complete, and the diversion of funds collected by the fee to other projects.

Portland may have averted its "Minnesota Moment," but for many in the county next door the process burned a few bridges as well.

"You've already decided to do this," said one woman as cameras from CBS affiliate KOIN rolled, "aren't these public hearings just a charade?"


Note: After this story went to press it was confirmed that a petition campaign is underway to gather signatures to put the fee hike on a ballot initiative. Frank Maguire