Frank Maguire
Despite everything, illegals still crossing into Arizona

June 1, 2011
Having read Jerome Corsi's The Late Great U.S.A.: The Coming Merger with Mexico and Canada, and being an Arizonan who lives in the illegal immigration/drug-smuggling "pipeline," I have held no illusions about the collusive deception of the American citizenry by the acolytes of transnational fascism, i.e., Public-Private Corporatism.

Early on I saw the alliance among Democrats, Republicans, and Chamber of Commerce business lobbyists who acted with both open and furtive opposition when Arizona offered SB1070.

I watched with chagrin how the Democrat Party maintained its partisan unity while some Republican business owners attacked their Republican Party brethren for their own financial purposes. Some tenured Republican politicians, all who have sworn an oath to uphold and defend the Constitution and the Rule of Law, have performed as usual, choosing pragmatism over principle.

I observed the results of SB1070's passage up-close as Interstate 10, which passes my Arizona City domicile, carried vehicles with Mexican license plates, and trailers laden with household goods, southward.

Many Mexicans who read the changing mood in re a growing determination against illegal residency saw the handwriting on the wall and chose to return to their homelands south of the border.

In a May 27 article in National Review Online, "A Win for Arizona, and the Rule of Law," http://www.nationalreview.com/articles/268252/win-arizona-and-rule-law-editors it was reported that the illegal-alien population nationwide fell 7 percent from 2008 to 2009 while according to the Department of Homeland Security, the number of illegal aliens in Arizona fell nearly 18 percent. 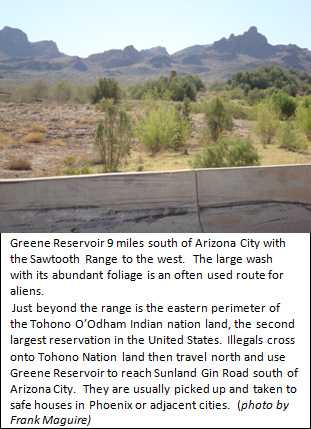 Now, after the recent Supreme Court decision which upheld Arizona's SB1070 "requiring all employers in the state (of Arizona) to use the federal E-verify system for screening-out illegal aliens and revoking the business licenses of firms that knowingly hire them," I observe another exodus of Mexico-licensed vehicles with trailers along I-10.

But! What is difficult to understand is why there is a continuing influx of illegals entering Arizona? This seems to make no sense and begs the question "What is going on?"

On May 24 I sent an e-mail to a reliable source employed by Homeland Security. "Yesterday there was a short bit on TV news about the taking into custody of 18 illegals by Pinal County deputies and Border Patrol Agents. Checking it out in a computer search gave nothing additional. Just a tiny article!

"Now, the very interesting thing is that though this event was absolutely newsworthy it had occurred on Wednesday May 18 but it was the 23rd before anything was reported by the news media. 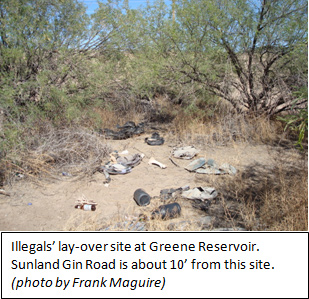 "Can you give me a hint as to what is going on? Has it been ordered to not report events when they occur? There are many reasons that I am interested in this, and one personal one is that the apprehension of the illegals took place just a few miles from my home in Arizona City."

My source responded, "We don't report when we get groups like that because it is a daily occurrence. I am guessing the press release was done by Pinal County to publicize what Sheriff Babeu has been reporting.

"We are still catching 100 people (new border crossers) a day in our area. Some agents believe that all apprehensions should be made known to the public so they know what we are dealing with, especially when we get murderers, rapists, repetitive drunk drivers, and drug mules, etc. I think the non-reporting is just from habit. Even 7-8 years ago when we were catching 1,000 people a day it was not a big deal or newsworthy to us... 'Just another day,' if that makes sense."

Obviously my sources don't think it makes sense. They, and I, believe that not informing the public of the continuing illegal incursions across our borders gives a dangerously false impression. "Out of sight is," as goes the old axiom, "out of mind." The citizen must remain vigilant. Because, there is continuing mischief afoot.

National Review Online, in the aforementioned article, sums it up. "Thursday's decision weakens the hand of the bitter-enders in the Chamber of Commerce, but it has not vanquished them. They are prepared to fight a state-by-state, scorched-earth battle against E-Verify.. . Passage (of E-Verify) will not be easy; the reason the Chamber of Commerce and the Obama administration made defeat of Arizona E-Verity such a high priority is that they want to trade mandatory E-Verify for something else. The White House sees E-Verify as a bargaining chip for amnesty while the Chamber of Commerce wants to hold it hostage to huge increases in 'temporary' worker programs."

We citizens who hold to our Constitution and the Rule of Law can't allow ourselves to be lulled into a false assumption that the battle is over. Each person must inform him/herself and remain absolutely diligent. We have to exemplify our diligence and determination in the coming elections. We must fight for our Constitution, our State's Constitutional right to make protective laws in keeping with the overall Rule of Law. Above all, we must thoroughly vet every candidate who asks for our vote.

Whether your issue is the economy or the culture and morality, don't make the serious mistake of trying to separate these issues; they are interdependent. If you fragment the opposition to the "progressives," you mustn't think, magically, that you will not get the worst of both worlds.

Remember Santayana's axiom. Progress, far from consisting in change, depends on retentiveness. When change is absolute there remains no being to improve and no direction is set for possible improvement: and when experience is not retained, as among savages, infancy is perpetual. Those who cannot remember the past are condemned to repeat it. In the first stage of life the mind is frivolous and easily distracted, it misses progress by failing in consecutiveness and persistence. This is the condition of children and barbarians, in which instinct has learned nothing from experience. George Santayana, The Life of Reason, Volume 1, 1905