Frank Maguire
The caste of career characters who wheedle-dee-dee

August 17, 2011
"Blessed are the poor in spirit, for theirs is the kingdom of heaven." Matthew 5: 1-12 "This beatitude is poles removed from the caricature of it which appears in political and social manifestos. The Antichrist also calls the poor to be blessed, but not for the sake of the cross, which embraces all policy and transforms it into a source of blessing. He fights the cross with political and sociological ideology. He may call it Christian, but that only makes him a still more dangerous enemy." The Cost of Discipleship, Dietrich Bonhoeffer, Simon and Schuster 1959 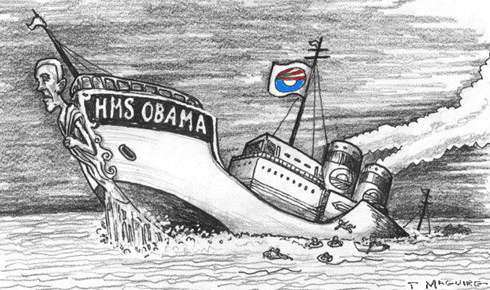 As I usually do, after reading the daily Bible verses, I look to see who has written what at RenewAmerica.com. I found three current articles that deal with the bi-partisan political deception that we citizens have had to deal with in re ambitious, career, "protect your sinecure, CYA, and, above all, always watch out for your own self-interest" politicasters.

It's important to remember that the North American Union scam (read Jerome Corsi's The Late Great USA: NAFTA, the North American Union, and the Threat of a Coming Merger with Mexico and Canada) has involved George Herbert Walker Bush, Bill Clinton, George W. Bush and continues under Barack Obama. All of this has been done behind closed doors with agreement by the MSM to not "leak" the globalist-scheme that was in process.

Remember, this sub rosa deception has been (is) bi-partisan. The Internationalist scheming goes way back in our history and was evangelized by the early progressives — the mega-capitalists, and the politicians who strove for the fascist economic/political system called Third Way and Public Private Corporatism.

It has taken this junta many years to have systematically "progressed" this far and to have produced a revolutionary "change." And it has taken a long time for the generally agreeable American citizens to have caught on and responded. Remember Santayana's caution that those who don't pay attention to history allow the egregious actions of firmly-embracing, aboma-like serpents to enwrap us and squeeze us real tight. (My own paraphrase!)

Consider, family and friends, that our caste of career characters who wheedle-dee-dee "I'm here for all citizens" have a flagrantly rotten track record. Respect for congress is down to 28%, according to one poll, (I don't let polls influence me, for there are three kinds of lies — "lies, damned lies, and statistics") so I do give careful consideration to the character of the pollsters and whether they are Party propagandists.

But, whether it is 28% or 48%, the fact is that it is disgraceful that we would maintain pragmatist, utilitarian, self-promoting (those who must equivocate, palter, dissimulate, and dissemble to save their seats) politicians in office.

One point in re my brother Lloyd Marcus' always-good writing: the displacement of Obama and the insertion of Hillary would not be an obvious action. Here is how it would be done?

The Party, making a plethora of promises to Barak Obama, would convince him to drop out — perhaps to take some high position in International politics/economics. Outrageous? Does anyone still believe that anything having to do with current politics is outrageous? Read Jerome Corsi's World Net Daily article, August 04, 2011, "Yes, Obama's eligible for president, in Kenya! New law approved after Barack spends $23 million U.S. tax money supporting it." Then, Hillary could, as writer Marcus speculates, magnanimously give up her State Dept. job and be willing to make all necessary sacrifices to serve the American people...to save "The People from the right-wing Tea Party terrorists."

I'm into my 74th year, have been to a whole bunch of State Fairs and Taffy Pulls, was raised in South Boston/Dorchester in the political Babylon of Billy and Whitey Bulger called Boston, and I've spent many, many years studying closely the designs of the artful dodgers who give us le Politique de pire — policies that make things worse.

I remember, also, what the stealthy fellow acronymed FDR wrote: "You can be sure that nothing that happens in politics is accidental." Or words to that effect!