Frank Maguire
Whatever the market will bear

March 6, 2012
John 2:13-16 When it was almost time for the Jewish Passover, Jesus went up to Jerusalem. 14 In the temple courts he found people selling cattle, sheep and doves, and others sitting at tables exchanging money. 15 So he made a whip out of cords, and drove all from the temple courts, both sheep and cattle; he scattered the coins of the money changers and overturned their tables. 16 To those who sold doves he said, "Get these out of here! Stop turning my Father's house into a market!"

"One deceit needs many others, and so the whole house is built in the air and must soon come to the ground." Baltasar Gracián , Art of Worldly Wisdom (1647)

The kiss-of-death for "Semper Fi?" http://www.wnd.com/2012/03/marines-starting-to-look-ridiculous/

Yes, sin is everywhere. But when sin is considered normative — blatantly open and defended as culturally acceptable — then Semper Fidelis has lost its transcendent meaning. "Semper Fi" no longer includes God.

I am heartbroken, and justifiably fearful. 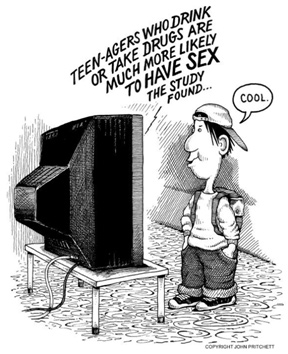 God told Abraham that He would not destroy Sodom and Gomorrah if there was even a small population of the righteous there. He destroyed that valley of licentiousness because abhorrent sin was tolerated by the complacent/complaisant citizens whose quintessential concern was, as it is in America today, "the economy, stupid."

The new covenant of tolerance: each person is his/her own god; sodomy, fornication and adultery are not only acceptable, they are glorified; casuistry is the "truth" to be expected; the economy exploits lust even to sell pornburgers to the "typical" youth market! And we have the audacity to ask God to bless us?

What spirits lead us in this nation? Should we not be trembling? Yes, God is merciful. But God is above all Holy and Just, and He does not abide sin. And when He is rejected, those who reject him — the nation that rejects Him — will receive the Just wages of that rejection.

It was the libertinism — an extension of libertarianism, which extended essential liberty — which God destroyed. Destruction came upon the Valley of Siddim because of that culture's tolerance of the sins God declared an abomination. http://bibleatlas.org/valley_of_siddim.htm

Who is, today, bargaining with God to save America? Is there an Abraham? Who is, today, speaking boldly, "The FEAR of the Lord is the beginning of wisdom," and the only route to America's salvation?

Pay attention to Rick Santorum — to what he says, and to the reaction that he receives from those who are in positions of leadership in our nation. Clearly there are persons who don't merely listen to Santorum, they actually hear him. His numbers are impressive.

But! Santorum is scorned by many public figures who are prominent in our nation. Some declare him to be an naïvely incompetent political campaigner because he wants to bring religious faith into the public square. In other word, the scorners recommend that casuistic-circumlocution and Potemkin-politics is the way to succeed in a pluralistic, multi-cultural democracy. Could this have been the condition in the Valley of Siddim?

Does this nation built upon the Rule of Law believe that the Law which we now prescribe is "Casuistry, wholly casuistry, and nothing but casuistry, so help Me Me?" If so, then who are the real fools in America's institutions of human wisdom? And, who are the fooled?