Frank Maguire
Ah! The things one chooses to remember and forget!

May 24, 2012
"Frank, thank you for putting this in context that is understandable for everyone...layman, clergyman, academic, et al. This says more than all the political spin doctors have said in reams of well-rehearsed propaganda. Again, thanks for stating the plain truth." Ken from Massachusetts

"The fact that so many successful politicians are such shameless liars is not only a reflection on them, it is also a reflection on us. When the people want the impossible, only liars can satisfy them, and only in the short run." "Big Lies in Politics," Thomas Sowell Townhall.com May 22 2012

"We must be free to stand up for righteousness as Dr. (Martin Luther) King charged and we must be bold in our positions, for 'a man cannot serve two masters.' We cannot walk in support of ideologies which are destroying the social fabric of the African-American community, this country, and diminish and demean the Gospel we preach." "A line drawn in the sand — or — walking the plank African American clergy must decide." http://www.renewamerica.com/columns/childress/120523

I sent that which is written below to a very dear friend. I did not intend to submit it for publication. But because he responded as he has, I have chosen to ask Renew America.com to publish it.

Three-plus years ago when Barack Obama was questioned about his "religion" he answered "I've always been a Christian." Which proves what? What path led him to this belief? I contend that it was Black Liberation Theology.

It proves that Barack Obama had no idea of the teachings of Jesus Christ and no knowledge of Scripture. Why? Simple! No one ever on the face of the earth has always been a Christian. "Always," to those who use the language properly and have not deconstructed "is," means forever. From the very cradle! Ab incunabulis!

Christianity is quintessentially unlike Islam. A person born into Islam — a natural born Muslim — is always to be regarded Muslim. And, if he becomes apostate — if he rejects Islam and converts to another religion — he/she is literally under the penalty of the ultimate sanction. He has rejected Allah, and is, thus, a kaffir.

To become a disciple of Jesus Christ one must make a choice at an age of personal responsibility. There is no Christian denomination that accepts one as a true disciple of Jesus and true possessor of the Faith unless she or he chooses Jesus, confirms his/her choice, and is, thus "born again."

So, it was very clear to me when I heard Obama's claim that he has always been a Christian that he has a race-based, ersatz Christianity. He was not born a Christian and he obviously has not made the choice to become a Christian based upon biblical exegesis but, instead, by eisegesis.

" Exegesis and eisegesis are two conflicting approaches in Bible study. Exegesis is the exposition or explanation of a text based on a careful, objective analysis. The word exegesis literally means 'to lead out of.'" That means that the interpreter is led to his conclusions by following the text.

"The opposite approach to Scripture is eisegesis, which is the interpretation of a passage based on a subjective, non-analytical reading. The word eisegesis literally means 'to lead into,' which means the interpreter injects his own ideas into the text, making it mean whatever he wants. 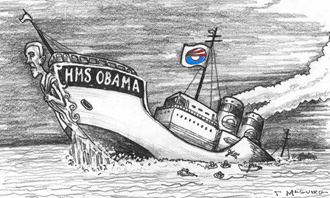 As incredibly capable as Obama is of forgetting events in his life (and fabricating non-events), he surely couldn't forget a conversion that presented to him some special problems.

Now, thanks to Jeremiah Wright, Barak Hussein Obama has, it seems to me, a major problem, and the Progressive-Democrats have, perhaps, a dilemma. I say "perhaps" because with the Alinskyites I always suspect some tactical contrivance in place.

If this were not so deadly serious, it would be quite humorous to see which side the Democrats take in this convoluted situation. Barack Obama's? Jeremiah Wright's? Or, somehow, both and neither. It will also be quite revealing to see the Obamaites call out the oathed-to-obedience minions, including the obsequious news-media retinue, in an attempt to prevent Congress from serving subpoenas on Jeremiah Wright and Eric Whitaker.

One further point that has to be watched: writer Jeffrey Kuhner asks this very salient question. No shallow answers are acceptable. "Mr Wright's comments beg a fundamental question. Why now? Why is he speaking out about Obama at this moment?"

Wright answers that he can no longer restrain the bitterness and anger that he feels toward Obama, who has betrayed him after all he has done for the Obama family.

I don't find this to be an adequate answer. It simply begs a further question, "Why is it now, at this precise moment, that you can't restrain your anger and bitterness?"

I suggest that to understand what Barack Obama was saying when he declared "I have always been a Christian," one has to know Obama's very close association with Jeremiah Wright, and Jeremiah Wright's absolute adherence to the Black Liberation Theologian James Cone. (http://www.acton.org/pub/commentary/2008/04/02marxist-roots-black-liberation-theology )

Also, read Michael Gaynor's article at renewamerica.com to get a further awareness of what the fundamental premise of BLT is as preached by James Cone and others.

Barack Hussein Obama was indoctrinated, after he left Islam for the sake of his political aspirations, into BLT by Rev. Wright. It is Obama's BLT creed that allows him to see Christianity as a religion equivalent to Islam. Because he is Black, he must be a natural-born Christian. Thus, from birth, he has always been one. Because he considers himself to be Black, and, for the purpose of utility he forgets his Whiteness!

Consider this, because it does help explain Obama's very unorthodox religious holdings, and his racially focused political behavior — which is Marxian praxeology — "the science and study of human action and conduct."

Whether you are an Obama supporter or an Obama opponent, you have to give serious thought as to what is going on here. Reality is reality, even for Democrats and Republicans. Truth is universal and objective, not historically-culturally determined, and certainly not partisan. And, historical determinism is Marxist ideology, the antithesis of orthodox Christian theology.

Permit me one further speculation. I maintain that "There is one thing rarer than hen's teeth, and that is a coincidence in politics." FDR wrote that you can be certain that anything that happens in politics is not a coincidence — it is always planned.

We now see the likely Republican candidate for president, the Mormon Mitt Romney, pledging to not make an issue of President Obama's religion(s). Is it a coincidence that Obama's propaganda minister David Axelrod has pontificated that the Progressives see any reference to Mitt Romney's Mormonism as being morally out of bounds?

To apply Thomas Sowell, could this have been "well rehearsed?" Artfully choreographed?