Frank Maguire
Believing, we will see

June 2, 2012
I sent this as an e-mail to friends and family. When my wife of 54 years read it she shed a few tears — her heart is beautiful — and she said, "Frank you have to share this with others. Send it to renewamerica.com."

She is such a wonderful counselor, and I thank God daily for His having blessed me, beyond that which I deserve, with my beloved Helen.

"By the same token, to believe in Jesus is not to know all that there is to know, for that will be the work and joy of eternity, but it is to immerse myself utterly in what I do know, in what has been revealed, in what has been manifestly made clear. Not as one on the outside, hoping, wistfully, desperately, that what've heard is true, but as one to whom God has, in His mercy, given a glimpse ... and so, as one who knows." Mr. Chris Potts of the Alliance Defense Fund

When it comes to words/phrases and what they convey, I am a discriminating fanatic. Sounds like a "hate crime," right? It's really a Love climb.

Now, this is better thought of as "Being IN Jesus, I believe." But this is not what is generally meant. And, of course, a fair question is "So, you're 'IN' Jesus, what does this cause you to believe?"

Over the years, I've come up with an assortment of ways to describe what I am trying to get-at, which is "We have to BELIEVE Jesus, not merely believe-in Jesus." Today, as I sat reading the gospel of John, I saw, almost as if it were the first time I've ever read the verses, how Jesus explained it.

John 12: 27-50 "Yet at the same time many even among the leaders believed in him. But because of the Pharisees they would not openly acknowledge their faith for fear they would be put out of the synagogue; for they loved human praise more than praise from God. 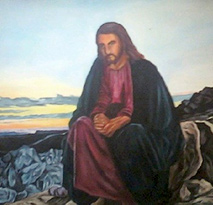 "If anyone hears my words but does not keep them, I do not judge that person. For I did not come to judge the world, but to save the world. There is a judge for the one who rejects me and does not accept my words; the very words I have spoken will condemn them at the last day. For I did not speak on my own, but the Father who sent me commanded me to say all that I have spoken. I know that his command leads to eternal life. So whatever I say is just what the Father has told me to say."

Jesus spoke these words, which were given to him by the Father. I believe in all of my being that Jesus spoke the Truth. Because? Because I don't merely believe IN him! I believe that which he believes, which is every word that has come from the Father — and those words are given to Mankind in His inerrant, infallible, never to be altered Word, and each of us receives the Truth of God's Word by the inspiration (the "breathing into") of the Holy Spirit.

Creator God is quintessentially Holy. He is also Just. God is Loving: He hates sin and Loves goodness, which is a result of our obedience to Him. He is merciful to we who acknowledge that we are sinners in need of His forgiveness and mercy, and who seek Him, with a repentant heart.

And, since Lucifer/Satan is real, Sin is real, and Hell is real, and God provided every person the freedom to choose between good and evil thoughts words and actions, and, thus, since man has no excuse that mitigates his evil thoughts, words, and actions, God's Justice includes His Wrath. God does punish. Jesus told us that his Father punishes. Without Holy Justice, there is no need for Mercy. The Father, the Son, and the Holy Spirit are made, then, unnecessary.

If God treated good and evil the same way, rewarding both good and evil equivalently, then God would not be a God of Justice and certainly not a God of Love. God directs us to live in obedience to that which He created as good. He gives us this direction because...He Loves us.