June 5, 2012
"Jehoshaphat lived in Jerusalem, and he went out again among the people from Beersheba to the hill country of Ephraim and turned them back to the Lord, the God of their ancestors. He appointed judges in the land, in each of the fortified cities of Judah. He told them, 'Consider carefully what you do, because you are not judging for mere mortals but for the Lord, who is with you whenever you give a verdict. Now let the fear of the Lord be on you. Judge carefully, for with the Lord our God there is no injustice or partiality or bribery.'" 2 Chronicles 19-20

"Some things that look like lies to me today will seem all right in the prisidential (sic) year." Finley Peter Dunne, "On Lying," Mr. Dooley's Opinions. (1908)

"A word is not the same with one writer as with another. One tears it from his guts. The other pulls it out of his overcoat pocket." Charles Péguy, "The Honest People," Basic Verities. (1943) 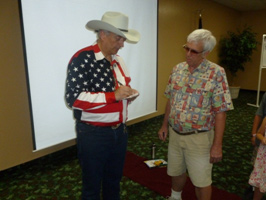 The 3rd Viceroy is the most eloquent rhetorician I have heard since I experienced, 30 years ago, at Grand Canyon College in Phoenix, Erik von Kuehnelt-Leddihn, a scholar and linguist nonpareil who cautioned about the destructive volatility of commixing égalité and liberté in that which we call democracy..

These two brilliant gentlemen are unalike in that Monckton makes a useful and wise display of his superb wit. He is, even as a "peer," peerless in his combining of erudition and humour. Kuehnelt-Leddihn is more stern. Combined they are complementarily comprehensive.

The 3rd Viceroy began his lecture by spoofing the guile of "consensus," a Marxian device that envelops Dialectical Materialism in a pastel-smog of democratic legitimacy dependent upon scientific determinism. http://www.marxists.org/reference/archive/mao/selected-works/volume-6/mswv6_30.htm

Needless to say, but I insist on saying it, Monckton grabbed my attention right from the get-go.

Later, Lt. Col. Lanoue and I had a discussion about etymology. Don has joked to me about my sometimes recondite word-usage. I told him that I am a fanatic when it comes to finding the singular word that precisely makes the point I am trying to convey. I offered my hypothesis that many persons (I avoided "most") who read anything substantial read to learn perspectives that sometimes affirm their own values but also expand upon and add to their understanding. I said, "Don, as a writer I also function as a teacher." He, being an intelligent reasonable man accepted my position — yet, not entirely convinced. I admire those who never stop asking themselves "although."

As thinkers such as George Orwell, et al, have written, we have to understand how words are co-opted by those who have a special agenda and who brew-up their own definitions. "Liberal" is one such word, as are "change," "science," "sustainable," and "progress."

Hillary Clinton asserted, not long ago, that "liberal" was no longer to be descriptive of the social-democrat. The word/concept now defining social-democracy is "Progressive." I thanked Hillary for emancipating "liberal," which had been misapplied by the Left. "Liberal" means "personal liberty," not Statist village-building.

Perlustrating through my Arcade Dictionary of Word Origins I came upon a word whose etymology should be recovered. The word is "cancan." I decided to have some fun with this word. I ask the reader to join in the fun involved in what I call rhetorical revanche — the retaking of lost territory...recapturing a word's original intent. Here, I ask for the reader's consideration.

"Cancan," unhyphenated in the original, entered into English as a word borrowed from the French. In the 16th century the word denoted "noise...uproar." It is believed to have originated from the Latin word quanquam, which means "although." Quanquam refers to "the prelude to a noisy scholastic argument."

In the 19th century that word had evolved and is now connoted as a description of an "uproarious dance...with high-kicking chorus girls." The Oxford English Dictionary now contains the extended description "extravagant and indecent gestures," and OED tells us that the earliest examples of cancan apparently referred to men. It gives the citation, "He usually improvises by dancing the can-can" — the hyphenated use of the word as written by A.E. Sweet, in "Texas Siftings," 1882.

What fun I will have in using the original "cancan" by applying it as modern political imagery. Vide licet, "noisy scholastic (political) argument," engaged in by politicians who resort to uproarious rhetorical canting* that is "extravagant and indecent." What a perfect description of the disingenuous diatribes of today's Leftist ideologues whose preferred communication is argumentum ad hominem — argument designed to avoid debating the issues by virulently vituperating against the character of their opponents.

The only historical inevitability is perfectly described by philosopher George Santayana. "Progress, far from consisting in change, depends on retentiveness. When change is absolute there remains no being to improve, and no direction is set for possible improvement: and when experience is not retained, as among savages, infancy is perpetual. Those who cannot remember the past are condemned to repeat it.