Frank Maguire
Nisi Dominus frustra-Unless God is with us, all is in vain

July 2, 2012
"Frank, this is a wonderful message from this priest. I, for one, support him and what he suggests wholeheartedly. I think it's way past time that Christians of all groupings come together in the name of the Lord we serve and work as a unit instead of tearing each other apart for all the world to see." Chaplain Dale Novasky

"When we come to the end of ourselves, not just mentally but completely, we are able to 'receive the Holy Spirit... There is now only One who directs the course of our life, the Lord Jesus Christ." "My Utmost For His Highest," Oswald Chambers,

I received this video http://www.stthomasmore.org/parish-clergy/video/invocation from a very dear friend and brother in Jesus the Christ. I am compelled to share it with you.

Pastor Andrew Kemberling, Pastor of St.Thomas More Catholic church in Centennial, CO displays courage in his addressing of the 2012 Colorado Republican State Assembly and convention. First, it is not certain that a majority of those who call themselves Catholics join him in this position which he confirms to be the consistent Catholic teaching.

Secondly, though he received applause for his courage, many did not applaud. I would venture to say that many in that assembly, though they might agree with much of that which he said, and might profess Christ, have no effective respect for the institution that he represents. They would rather be anti-Catholic than anti-Socialist if it means uniting with the Catholics and defending Catholicism.

Having spent many years within Catholicism and the Evangelical body (I'm a Baptist Deacon), I know how this works. In the pro-life struggles I saw that many pro-lifers guaranteed that the "socialist/atheist" death squads would win simply because Christian pro-lifers refused to support one another for, ironically, "religious" reasons.

This priest is explicit that all Christians must be unified in the war against those who would make men/women god(s). Seems to me that as disciples of Christ, we have been requisitioned to this position before. And it is God who requisitions us, not novel theologies, which bring the dismembering of the Body of Christ. 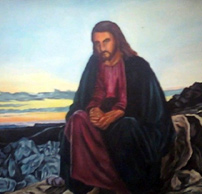 Consider the apostles! They were a diverse body of men and held some personal beliefs contrary to one another. They were a paradigm of the nature of mankind. But, what did the apostles have in common? That which is the only necessity! They believed Jesus Christ and they chose to follow Jesus, even when it meant the Cross.

We have been too comfortable in America. And most persons seem unwilling to become uncomfortable — unwilling to take the actions necessary to do that which is necessary, that which God commands, to save this nation. What comforts are we willing to forego immediately? What material goods? What "entertainments?" How many "wants" must go before we are reduced to "needs?"

The fact is, and every Christian is supposed to know this, that when we joined with Jesus, we should have — should have — known that there is one essential need, and that is Jesus Christ. And everything else is, then, a mere "want." Jesus himself told us that our choice to be of his Body means that we must have no other wants — "gods" — that compete with wanting him. He told us that he will provide for his own — provide all that we need. That's it! Plain and simple!

For a Christian to hold to the secular materialist idolatry that "It's the economy, stupid" is to hold to confusion that will sustain both America's moral and economic decline.