June 22, 2013
"Modern men and women do not live by bread alone, but by every catch phrase and revelation that comes from the lips and private lives of their heroes. But since such fame is largely based on famousness, these celebrities are living tautologies and the emptiest of heroes."the last christian on earth, by Os Guinness, Regal publishers, Ventura, California.

I set out this a.m. prepared to produce a paper that would provide the solutions to IRS, NSA, Fast and Furious, Slow and Spurious, and all of the other hokey-pokey of the Obama Administration's contempt for that which was once designed to be Constitutional government, comprised of moral citizens who would elect and appoint persons of integrity and character.

I struggled in mind, brain, and psyche during my sleeping hours – 9:30pm 'til 2:00am – dealing with this incubus, asking for grace from a Source Sublime, transcendent of the standard secular disjunction-propositions and ambiguous- syllogisms. Attempting to deal with exhausting all possibilities I awakened exhausted.

A disjunctive proposition is defined as something "strictly true if it enumerates all the possibilities, that is, if the alternatives are mutually exclusive and collectively exhaustive. Otherwise, strictly speaking, it is false." 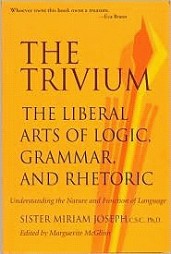 "The strict purpose, then, of the disjunctive proposition of every choice is to limit the choice of alternatives that if one is true, any other must be false. Only under this (strict purpose) condition does it serve as a true instrument of reasoning toward truth."

So, my magnum-opus cure-all will be delayed.

In the introduction to this work of great value, I start with quoting the book's editor Marguerite McGlinn's introduction.

McGlinn asks "What is language? How does it work? What makes good language?" She quotes, at the outset, Samuel Taylor Coleridge, who wrote that prose is "words in their best order"; and poetry is "the best words in the best order."

This inspired me to expand, humbly, upon Coleridge, thusly:

With confidence in the typical reader of renewamerica.com, I have chosen to make you aware of The Trivium as a resource worthy of your attention and acquisition, which by studying what Sister Miriam Joseph (Agnes Lenore Rauh) offers you will profit more than you would in reading a lengthy treatise of mine. The Trivium will add to your natural ability to recognize how equivocal arguments are replete with disinformation and misinformation – especially the language of argumentation conceived by politicians and utilitarian propagandists.

I attempt to synopsize Sr. Miriam Joseph's Chapter 8 "Relations of hypothetical and disjunctive propositions," by concisely providing some general rules.

Such a connection seems to be reasonable but it's not universal. To conclude that it is universally true one can fall victim to the fallacy of the "undistributed middle." 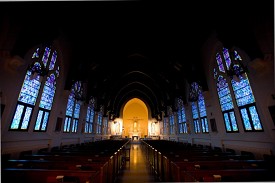 Since the Trivium is a book designed for students of logic, grammar, and rhetoric, it is a book that requires a labor of love and learning. It was a five day a week mandatory course for freshmen at St. Mary's College. Sister Miriam Joseph started at St. Mary's in 1931 and retired in 1965. Her book was designed to "influence a generation of women to think carefully, to read thoughtfully, and to write and speak 'the right principles' eloquently."

The following is a humorous and simple example of a disjoined (disjunctive) syllogism.

The humor here, which can trap the unwary respondent, is that if he/she says, "It's obvious that John is not a rabbit."

You can then answer "But if John is either a rabbit or not a rabbit, then John must be a rabbit."

The point here is that if you are not very careful when involved in a dialogue with someone well-schooled in argumentation, he/she can make you look quite silly.

The example I've given is of no substantial consequence, other than to make you look a bit dazed to any on-listeners.

Imagine, however, you are dealing with a very clever lawyer in a court of law, and you are a less clever lawyer, or even an average witness. Having been made to look incompetent can have undesirable (for you, and the accused on trial) consequences.

Unfortunately, for me, I was, back in the late 70's, engaged in a debate with a professor of law at a large Arizona university. Without going into detail, this prof efficiently and successfully confused the on-listeners by convincing them that I had said exactly the opposite of what I had said.

I stumbled-tongued my defense, which made me look befuddled, and I found no way to recover. When I tried, he just affected a very superior, confident aspect and I decided it was safer for me to stop talking entirely. He knew how to handle it and I didn't.

This is how clever politicians and propagandists befog the average citizen. And this is what is happening in America now from the mouths of the Progressive politicians well-schooled in the methods of propaganda, especially since the allies of the Progressives in the main-drain media simply ditto their celebrated PROGRO/socialist mélange.

Truth is, the citizens who try to defend America's Constitutional Law are at best treading water or parsing into a hurricane-force head wind. At worst, we are drowning or getting blown away.

I believe I have stated a fact. Can we recover and survive as a nation? Pray that we can.