Frank Maguire
The parable of the unwelcomed pastor

July 29, 2013
I had been trying to think of how to respond to a dear friend of mine – she is a Christian in a denomination that is criticized, in many quarters, as exclusivist – who is in misery over what has been happening to "The Church."

I understand her agony since she is religiously, emotionally and traditionally "invested" in her denomination. My wife of 55 years, Helen, and I have gone through what she is still suffering. We since have been, in conscience, led to conclude that we are part of Christ's Body when we are obedient disciples who love God with all of our being, love our neighbor more than we love our wonderful self, and love and provide for our family (1 Timothy 5:8) for if we do not do this "we are worse than non-believers and the love of God is not in us."

Perhaps you've read this before, The Faith Once Delivered, but I presume to paraphrase and build upon Peter's words "This is just a reminder given because when I remind others, I remind myself." http://www.renewamerica.com/columns/maguire/110705 !

The Holy Spirit of God had, I knew, through one of his own, my friend and brother in the Lord, Dan Spagone Cdr. USN Ret, provided that which I needed at that very moment: The Powerful Sermon. I read this and knew that it was the answer. "After he recited this, he looked towards the congregation and told them all what he had experienced that morning. Many began to cry and many heads were bowed in shame. He then said "Today I see a gathering of people not the living body of Jesus Christ. The world has enough people, but not enough disciples. When will you decide to become disciples?"

This is how God works, and it works if one listens, watches, and hears...when we unceasingly pay attention to His presence. Obedient disciples can never be "Homeless."

Pastor Jeremiah Steepek transformed himself into a homeless person and went to the 2,000 member church where he would soon be introduced as the new head pastor. He walked the aesthetically lovely grounds, and around the building inside of which he would soon be preaching and teaching, and he watched the members of the congregation arrive. He took notice of those who acknowledged him as a person, and at least nodded a good morning. They numbered three. In his disguise he pleaded with some that he had not eaten in two days, and asked if they could spare some change to buy food. Not one in the congregation had spare change. And, he became virtually invisible to all who passed him by.

He went into the sanctuary and deliberately walked toward the front; he was asked by the ushers if he would please go to the back. He greeted people to be greeted back with stares and indifference. No smiles of human acceptance

He sat in the back of the church and listened to the announcements and such. When a deacon said "Let's all stand and greet our brothers and sisters" he watched the embarrassment of those who turned, looked at him and then quickly turned away. He heard the deacon say "For those of you who have not been here before, please fill out the card the ushers will give you so that we can personally greet you and visit you."

The homeless man sitting in the back stood up and started walking down the aisle. The clapping stopped; with all eyes on him he walked to the pulpit, adjusted the microphone, and stood looking out over the large assembly. He paused, and looked, and the sense of discomfort among those assembled was palpable. 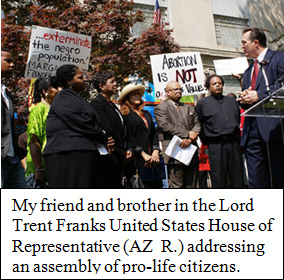 Then he spoke. "The King will say to those on his right, 'Come, you who are blessed by my Father; take your inheritance, the kingdom prepared for you since the creation of the world. For I was hungry and you gave me something to eat, I was thirsty and you gave me something to drink, I was a stranger and you invited me in, I needed clothes and you clothed me, I was sick and you looked after me, I was in prison and you came to visit me. Then the righteous will answer him, "Lord, when did we see you hungry and feed you, or thirsty and give you something to drink? When did we see you a stranger and invite you in, or needing clothes and clothe you? When did we see you sick or in prison and go to visit you?'"

"The King will reply, 'Truly I tell you, whatever you did for one of the least of these brothers and sisters of mine, you did for me.'" (Matthew 25:40)

Once more he paused and looked at the congregation and told them all what he had experienced that morning. Many began to cry and many heads were bowed in shame. He then said "Today I see a gathering of people not the living body of Jesus Christ. The world has enough people, but not enough disciples. When will you decide to become disciples?" He dismissed the counseled congregation. Hopeful, but realistic!

A Meditation on Rembrandt's Jeremiah 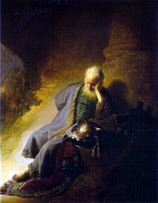 "As I gaze on Jeremiah's face and hands, I felt the pain and disappointment of a man who served God but met with much opposition and ridicule. No one listened to him. Everyone did what seemed right in their own eyes. Jeremiah had talked and scolded and cajoled but it all fell on deaf ears. And because of this, he had to watch as his beloved country was sacked, Jerusalem burnt and the temple destroyed. He had failed as a prophet of the Lord to convince his people. Though the fault was not his, the guilt must have weighted heavily on his mind. The guilt and the pain of a prophet as revealed in this painting." Alex Tang