"Change as change is mere flux and lapse; it insults intelligence. Genuinely to know is to grasp a permanent end...." John Dewey, "The Influence of Darwinism on Philosophy." (1909)

"There is a certain relief in change, even though it be from bad to worse." Washington Irving, "Tales of a Traveller." (1824)

"Progress is a nice word. But change is its motivator. And change has its enemies." Robert Kennedy (1964)

"Whenever a thing changes and quits its proper limits, this change is the death of that which was before." Lucretius "On the Nature of Things." (1st century B.C.)

"In the religious order the spirit of apostasy intends to fully possess the Christian faith and through revolutionary change-agent theologians and priests transform it completely.... Having made God more and more like man....the shapers of religion made it feasible to abandon God, to simply believe in man." Richard John Neuhaus, American Babylon http://www.renewamerica.com/columns/kimball/130805

"Our idea is that to be a virtuous citizen is to be one who tolerates everything except intolerance." Leslie Armour, professor of philosophy at the University of Ottawa (From The New Tolerance, Josh McDowell and Bob Hostetler)

Before I start today's counsel session, I have made some copies of a graphic I want you to include in your copy-books. 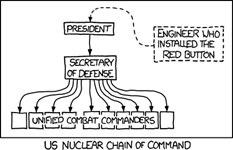 I like to peruse that which humans call cyber-space to see if there is anything useful in orbit. Seldom there is. It's typically products of the human brain. But once in a while, usually in humor that is self-deprecating (humans believe this is an indication of humility) I come upon something that almost makes me chuckle. I confess that I've always wanted something beyond this seductive smile, but I have no "chuckle" mechanism.

Use this scheme in everything that you do. What we aim at is to be the installer of the Red Button. 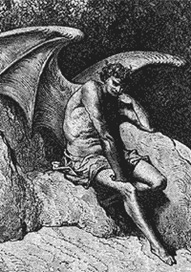 This is how social-democracy is designed to succeed. It is very simple. One three-letter word is removed from the lexicon and it removes all impediments to progressive change. The word is "sin."

If the other unmarried man or woman engages in same-sex coitus it is regarded as not normal, and was, in cultures that once valued that which was called "The Good Book," anathema. As you can plainly observe, this antiquated morality has evaporated...boiled away in the heat exuded by the inflamed libertine.

Does the problem have to do with marriage? If it is, the solution is simple. Do not maintain legal impediments to anyone's marriage to anyone they desire. Only this will work in cultures where there is neither intellectual nor moral distinction made between "liberty" and "libertine." (Lucifer smiles!) It is a sure sign of our success, my children, that an increasing number of cultures are requiring a license for personal freedom. Congratulations! Well done my faithful servants.

Write in your copy-books that concepts of moral, immoral, and amoral are outdated. The concept we shall persist in spreading is "pannormal." This is our fundamental strategy, using whatever tactics that opportunities provide.

You have all been schooled in the philosophy called pantheism. Pan, meaning all, and theos meaning god. All is god. Pannormal is, then, all is normal. You should never miss an opportunity to publicize this. You won't have to force it upon anyone because in the present, libertine culture this is what people want to believe...to consider themselves virtuously tolerant.

So, I repeat, the solution is to convince a willing citizenry (residents?) to accept laws that allow anyone to marry anyone else. Call the laws the "fairness, tolerance and dignity laws."

This will cause some political and social dissent from the anti-progressive traditionalists. But in the present state of things, libertinism is the desired condition. G. K. Chesterton, was correct when he wrote that "The first lie out of Hell is 'I am my own.'" Chesterton calls it the first lie: I call it My First Counsel.

Result: Those marginalized as anti-progressives will be convinced (threatened) that their unfairness, intolerance, and imposition of indignities will be punishable by laws. They have called them (I actually suggested it) Hate Crimes Laws. Through a process of re-education, mandated and sometimes draconian, all traditional history must be expunged, and the traditionalist's information resources destroyed. This is not as difficult or time consuming as it sounds. Once things reach what is called "critical mass" things happen instantly. One day there, the next day gone.

Since I mentioned "citizenry," I came across an item in the America media that is a stellar example of how a culture can be directed to make the most absurd laws and regulations. An official in the city of Seattle, Washington has issued an order that the word "citizen" will no longer be used, and will be replaced by the word "resident." He reasoned that not all persons living in Seattle are citizens, so the non-citizens who are residents could be offended. There was more ... something about why brown bags are offensive. This gave me mixed feelings about our having so many accessories to our work; I was both pleased and disgusted when I thought of the stupidity of the human race, and that many are choosing residency in Pandemonium until that predestined time comes.

Before I conclude, I want to reassert the points I've been making. There have been many efforts to remove God. The efforts were ultimately fruitless, even when they worked pro tem. But we see now that the cultural infection of the secular has also infected the religious. 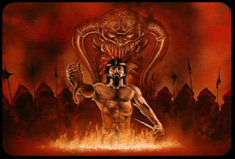 So, acolytes, I counsel you to just let God be whatever they want to make Him, and persist in removing that one three letter word. Sin! Sin is out. Repeat, "No one sins any longer."

When sin is retired, no one need feel guilt or shame for doing anything they please, whenever they want, and with any whom of their choice. In both the secular and religious today it is accepted that Man's nature is to "Feel good, be happy, and prosperous."

Send all reports, comments and suggestions to the Stygian Council Chamber.