March 9, 2015
As things degenerate in America, and spiral down in rapid descent, I felt directed to ask RA.com to republish this article. Three pieces I read this week are virtual "screamers" that accentuate the negative.

Alan Keyes is, as always, straight-on in his "Hey America: who loves ya, baby." He asserts, correctly, that Barack Hussein Obama set out to interpret the U.S. Constitution – to translate it into Alinsky. And, in re the Declaration of Independence, we can go back to Woodrow Wilson who speechified that it was o.k., but! But, only if you pay no attention to the part about "unalienable God-given rights."

Then, once the Constitution and Declaration are shredded, the job of creating an Alinskyite "crisis" becomes child's play. Certainly when America then functions as a social-democrat, virtual-Fascist bureaucracy under the execution of an autocratic ruler.

The second RA article that punctuated my August 4, 2010 piece, written by Rev. Austin Miles: "Obama's intention – no further elections." Miles attends to another of the crisis-creations that has been set-up by Obama. "Obama has stated that if Israel attempts to send war planes over Iran to take out the compound that he will order U.S. jets to fire on the Israeli planes...yes...to shoot them down."

Netanyahu has already made it clear to the U.S. Congress that Israel will do what it has to do, regardless of whether the U.S. likes it. So!? Crisis? To the degree of the imposition of martial law?

The third article was in World Net Daily (WND), by Cheryl Chumley: "Obama Pressing for Federal Control of Local Police." Imagine! The Federales threatening to bankrupt American police departments by not shipping them off some "federally owned moolah." And, then, like the Schutzstaffel (SS Protection Squadron), all police departments will be under the control of Washington D.C.

Having made myself aware of whom the real Obama is, right at the outset, I anticipated that which Alan Keyes, Rev. Miles, and Cheryl Chumley have told us – this week.

"If a company does now know why it exists then it will never know if it is failing or succeeding." Jesus Among Other Gods: The Absolute Claims of the Christian Message by Ravi Zacharias, W Publishing Group, a Division of Thomas nelson Inc. (2000)

"In what sense do we reject ethics, reject morality? In the sense given to it by the bourgeois, who based ethics on God's commandments! On this point we, of course, say that we do not believe in God." Vladimir Ilyich Lenin (1870-1924), Russian revolutionary, founder of Bolshevism, leader of the Bolshevik revolution, Soviet premier (1918-24)

John Adams, Thomas Jefferson, Benjamin Franklin, and 53 others combined to establish our constitutional-republic and signed their names to the Declaration of Independence, with its principle of citizens having been endowed by our Creator with inalienable rights. They made it very clear that a concept of participatory government is the most difficult of social-political experiments to develop and maintain. "Here is what we have given you, if you can keep it" is the essence of their cautions.

Shelby Cullom Davis rephrased and brought up to the present these cautions in his essay in The Canon: The Intercollegiate Studies Institute's Member and Alumni Magazine (Fall 2009). Davis wrote "For many, the phrase 'our sacred Honor' is a concept from another time and another culture...so remote as to have little personal significance two centuries later. But to those fifty-six who signed the Declaration of Independence, there was great personal, future significance. Far easier, we suppose, to expect the government to impose such virtue as we must have than for each citizen to take upon himself the strenuous burden of a virtuous life. It is time to recognize that doing one's own thing is totally incompatible with responsible liberty. This, I believe, is what (Aleksandr) Solzhenitsyn had in mind when he said 'I insist that the problems of the West are not political. They are psychological and moral.'"

In his run-up to his presidential campaign, Barack Obama said that he believes that the U.S. Constitution can be interpreted as including the right to redistribute income. His position is restated in various ways by those whom he has placed in Tsardom. 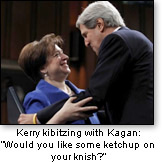 In the recent committee questioning of Elena Kagan, Obama's candidate for the Supreme Court, one congressman asked her if she supported the Declaration's "endowed by our Creator with inalienable rights" as accepted and confirmed by our founders. Kagan said that such is not her functional responsibility – that she is merely asked to defend the Constitutional rule of Law.

The congressman pressed her, but Kagan again hedged and refused to give a direct answer. It is clear that what Kagan was doing was playing the "living document" card – the Progressivist doctrine that the Constitution can be interpreted by those who are in power to mean whatever they determine that it means.

In keeping with this attitude exemplified by Obama and his minions, I came upon a short but salient article in the American Family Association Journal (www.afajournal.org), August 2010. It's entitled "Humans and Holdren," by staff-writer Teddy James.

I cited the following Holdren quote in Part I of this series, but I want to reinforce it because it is demonstrative of the Progressivist world-views of the Obama administration.

Holdren, former Harvard professor, wrote, in his Malthusian-Darwinian book Human Ecology (1974), "Indeed, it has been concluded (NOTE: By whom he doesn't say, but "concluded" means a conclusion – i.e. an end to any further debate) that compulsory population-control laws, even including compulsory abortion, could be sustained under the existing Constitution, if the population crisis became sufficiently severe to endanger the society."

Writer James points out, sagaciously, "For Holdren, the solution is to manipulate the Constitution, written by the men who said in the Declaration of Independence, 'All men are created equal' and are 'endowed by their Creator with certain unalienable rights, that among these are life, liberty, and the pursuit of happiness,' to destroy human life."

If we examine, carefully, the Progressivist position that the U.S. Constitution is, in the hands of the Progressives, a malleable, exploitable antiquaille, and that the Declaration of Independence is no longer relevant in a culture that dismisses it as merely a "religious" position, then what can we make of the Constitutional requirement that only a natural-born citizen is permitted to be president?

Further, the covert scheme to amend the Constitution by executive Diktat to accomplish amnesty for "illegal aliens?" And, eventually, the Constitutional amendment that limits the presidency to two terms?

Many pundits see Obama's absolute refusal to provide his birth certificate and other evidence that he is, de facto and de jure, qualified under the Constitution to be president, to be irrational.

I ask you to consider that the refusal by Obama to provide Constitutional proof of his legitimacy to be president to be a very rational, strategic ploy. If he can accomplish this, then he has, for all his intents and purposes, succeeded in convincing the citizenry that everything in the Constitution is legitimately interpretable by those who have seized power, and who are intent upon keeping it.

There is another possibility that gives consideration to the increasing held opinion that the Narcissist-Echo legend is involved. Even professional medical specialists have said that Obama is very likely a Personality Disordered Narcissist – a full-blown pathology.

"When one observes the difference between what President Obama says and what he does you begin to wonder if we elected Sybil. His word and deeds are so widely diverse that if he is not suffering from Multiple Personality Disorder then he is simply being a typical disingenuous politician.

"Perhaps the best example of a possible Multiple Personality Disorder symptom is the way he talks about the American people. His rhetoric talks about the American People as great and able to lead this country to recovery, yet he proposes programs that make government larger than the people and involved in every aspect of their lives, as if he did not trust the people he just praised."

The personality Disordered Narcissist receives his/her psychic nourishment from his tributary Echoes. The French have an applicable phrase: folie à plusieurs ("madness of many"). Recent psychiatric classifications refer to the syndrome as dependency psychotic disorder and induced delusional disorder – "The presence of the same or similar delusional ideas in persons closely associated with one another."

If Obama is more than a "typical disingenuous politician" but, instead, possesses a pathological messiah-complex, then I offer a Scriptural parallel. I caution that in my drawing this parallel, I do not, G-d forbid, imply that the man Obama is equivalent to Jesus Christ, the Christian's Messiah, or that Jesus was pathological. I merely ask the reader to consider Jesus' response to Pontius Pilate, and his non-response to the chief priests and elders who questioned Jesus about his identity and his authority.

Matthew 27:11-14: "Meanwhile Jesus stood before the governor, and the governor asked him 'Are you the king of the Jews?' "Yes, it is as you say," Jesus replied. When he was accused by the chief priests and elders, he gave no answer. Then Pilate asked him, 'Don't you hear the testimony they are bringing against you?' But Jesus made no reply, not even to a single charge – to the great amazement of the governor."

When the "governors" ask Obama "Are you a natural-born citizen of the United States?" Obama answers, essentially, "Yes, it is as you say." He asserts his citizenship and, thus, the legitimacy of his presidency. Beyond this, he believes himself to be above any obligation to provide evidence to the American citizenry whom he sees as mere "priests and elders."

I think it is reasonable to speculate as to whether Obama is a shrewd, Alinskyite revolutionary or a pathological narcissist. In either case, Barack Hussein Obama and his Ministers are enemies of our Constitutional Republic, and the antithesis of America's Mission Statement.