I start my troubling article with a simple axiom: for Truth to be respected there must be an agreement that historically verifiable facts are true. It would be disingenuous to rhetorically discredit historical facts to suit one's own parochial purpose. I believe that it will cause you who read these facts – in this day of Islamic jihad against the Jews, Christians, and Israel – some discomfort. I could say "Sorry about that!" but I wouldn't be truthful. I only hope that any pain and discomfort will bring you only that sort of pain gained from serious concern.

I start with the Roman Emperor Constantine and his ultimate adoption of Christianity as the official religion of the Roman Empire in 321 A.D.

"When Christianity was given the approval of the Roman Empire, the Emperor began to enact into law the concepts and claims of the Christian theologians against the Jews and Judaism.

In the Edict of Milan (313 A.D.) Synagogues were outlawed. Another edict (315 A.D.) authorized the burning of the Jews if they were convicted of breaking the law. Further laws were passed that curtailed rabbinical jurisdiction, prohibited conversion to Judaism, and excluded Jews from holding high office or serving in the military.

The Council of Nicea (325 A.D.) was the first ecumenical council of the Church. The council changed the celebration of the Resurrection from the Jewish Feast of First Fruits to Easter in an attempt to disassociate it from Jewish feasts. The council stated "For it is unbecoming beyond measure that on this holiest of festivals we should follow the customs of the Jews. Henceforth, let us have nothing in common with this odious people...." In addition to calling them "this odious people" the council also referred to the Jews as "polluted wretches, a most hostile rabble" and "parricides."

Eusebius of Caesarea (c. 265-339 A.D.) "taught that the promises of Scripture were meant for the Gentiles, and the curses were for the Jews. He asserted that the Church was the "true Israel."

St. Hilary of Portiers, a French bishop wrote that "The Jews are an odious people...a perverse people accursed by God forever."

St. John Chrysostom presented eight sermons against the Jews. "The synagogue is not only a brothel and a theatre, it is also a den of robbers and a lodging place for wild beasts... . Jews are inveterate murderers possessed by the Devil. Their debauchery and drunkenness gives them the manners of a pig. This why I hate the Jews."

Saint Jerome, the translator of the Bible into Latin described Jews as "serpents, wearing the image of Judas. Their psalms and prayers are the braying of donkeys...they are incapable of understanding Scripture."

Saint Ambrose, Bishop of Milan who had converted Saint Augustine wrote "The Jews are the most worthless of all men. They are lecherous, greedy, rapacious. They are perfidious murderers of Christ. Their religion is a sickness...and for killing God (sic.) there is no expiation possible, no indulgence or pardon. Christians may never cease vengeance, and the Jews must live in servitude forever. It is essential that all Christians hate them."

Saint Augustine, considered the greatest of all the Church Fathers in terms of the overall impact of his theology of the Jews. When asked "Why has God allowed the Jews to continue to exist?" he answered "that although the Jews deserve death, they are destined to wander the earth to witness the victory of the Church over the synagogue."

Saint Thomas Aquinas, the most important medieval theologian argued that because of their sin of deicide the Jews were destined for "perpetual slavery." He further argued "Jews should be compelled to work; (they) should be forced to wear a distinctive badge in order to distinguish them from Christians; Jews and heretics should be legitimately killed after a second warning."

Martin Luther originally spoke favorably of the Jews. Then, in a pamphlet (1543), entitled The Jews and their Lies, a diatribe against the Jews, Luther made proposals for dealing with them. "Their synagogues should be burned; their houses should be destroyed, their Talmudic writings should be confiscated; their Rabbis should be forbidden to teach; their money should be taken from them; they should be impelled into forced labor... ." They are a "miserable and accursed people...stupid fools...miserable, blind and senseless...thieves and robbers...the great vermin of humanity...lazy rogues...blind and venomous." 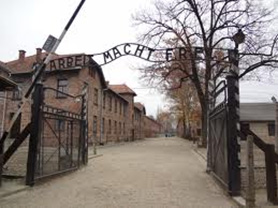 In 1984, Eliezer Berkovits, a renowned Orthodox Rabbi wrote that one could draw a direct line between the NAZI holocaust "and the moral bankruptcy of Christian civilization and spiritual bankruptcy of the Christian religion."

In Mein Kampf Adolph Hitler included part of a speech he had made in Berlin, where he received a standing ovation. Hitler proclaimed "I believe that today I am acting in accordance with the will of the Almighty God as I announce the most important work that Christians could undertake, and that is to be against the Jews and get rid of them once and for all." He continued "Martin Luther has been the greatest encouragement of my life. Luther was a great man. He was a giant. With one blow he heralded a new dawn and the new age. He saw clearly that the Jews need to be destroyed, and we're only beginning to see that we need to carry this work on." And the NAZI "New Dawn" created such as Auschwitz.

In Part Two We'll look at Scripture and see what God himself says about Zion, the home of his chosen people.