July 6, 2015
"From the days of John the Baptist until now the kingdom of heaven suffers violence, and violent men take it by force." Matt. 11:12

"Not everyone who says to me 'Lord, Lord" will enter the kingdom of heaven, but he who does the will of My Father who is in heaven will enter." Matt. 7:21

Disciples of the Lord, friends, family, and neighbors, I was born in America in 1938. The Judeo/Christian standard that produced the Declaration of Independence, the Constitution, and the Bill of Rights was implicitly revered. We still had a satisfactory – mostly – adherence to and application of the republican standard of political powers assigned to the executive branch, the legislative branch, and the judicial branch. And we had, fundamentally, a political party system of two major parties, but not restricted to just two. We had constitutionally guaranteed states' rights, and We the People were to be protected by a government whose powers had been assigned – allowed, and limited – by America's founding patriots.

We had families. We had men, the great majority of them who went out daily to work, brought their money home to feed, clothe, and provide shelter for their wife and the caring mother who frugally and wisely managed the saved and invested capital (i.e., assets available for the production of other assets), the home and the children.

We made, generally, our own simple and wholesome entertainments. The world of constant distraction from reality that the Romans called panem et circenses had not yet captured the culture and its families. And the world of vulgarity, crudity, Colosseum violence, blasphemy, and pornography had not yet make its stinking, overflowing-the-sewers entrance into the world in which I was born and raised.

In the 1950's came the Playboy and Playgirl philosophies and the ubiquitous pill that separated copulation from impregnation. This brought cultural changes and economic changes. Revolutionary, fundamental changes! 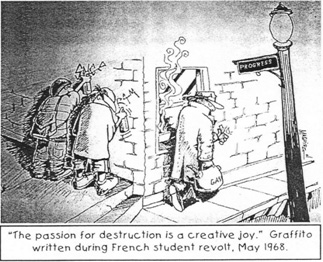 Also came moral relativism and the educationist pushing of "self-esteem" with its libertine self-estimation that "I am all my own and will not have other gods before me."

Soon came religious impotency and apostasy of the Judeo/Christian standards and the equivalency of religions...equating false prophets with Jesus Christ. And soon Progressive Social Democracy that shredded our constitutional government exposed itself. The legislation by an oligarchy replaced the Natural Law of God.

Here I sit, writing this, in the "Common Era," historically called Anno Domini – In the Year of Our Lord – 2015. I, and others like me, have been declared enemies of the New World Order. God's Law has been made illegal, and our Constitution has been declared to be inadequate for this New Era. All this by a vote of socially/monetarily-interested factions united in conspiratorial alliance promoting their interlocking values.

To you of my era, I probably don't have to create an explicit picture. To you young folk who might be reading this, I make a serious recommendation. Do not accept – without conscientious study of the issues in totality and in historical context, putting aside political partisanship – anything that you are taught. Be skeptical of all, without falling into fruitless, brain neutralizing cynicism.