Frank Maguire
Borderline insanity: all is not quiet on the Southwestern front

July 16, 2015
I thought this a good time for me to request that the Renew America editors reprint a couple of my previous articles on the illegality of illegal immigration and sanctuary cities.

Last night, 7/14/2015, my wife and I watched the Donald Trump for president rally here in Phoenix. We had not heard him speechify before. I will break my standing rule amongst my family – "Never say 'awesome.'" Mr. Trump – he who trumpets from the ramparts – is awesome...and then some. I know a rampart is for defense, but when Mr. Trump trumpeted, he blew the stunned enemy away. And they'll have nowhere to hide, eventually, for sanctuary.

Were I at the rally I would have hollered "Trump, Trump, kick 'em in the rump, dump 'em in the trash can, "bump, bump, bump.'" All the time laughing!

"Tax free!" he repeated for effect. Then he did his pregnant pause (a la Jack Benny and Groucho Marx) before the punch line. "If Trump was dealing with Mexico he would tell 'em 'We'll tax you $35 for every part you ship into the U.S." (Lots of laughter and applause!)

Mr. Trump certainly has gotten the attention of the American citizen. And, according to all the reports, the good citizens of the U.S. are in the battlements with Citizen Donald.


So far, the DOJ, the State Department, DHS, and the FBI have all been implicated in the ("Fast and Furious") scheme and coverup. Putting faces on those agencies means that Americans need to know what Holder, Hillary, Nappy, and Mueller knew and when they knew it. Eric Holder, Hillary Clinton, Janet Napolitano, and Robert Mueller are automatically accountable for what occurs on their watch in the agencies which they head in the federal government.

Of Holder, Hillary, Nappy, and Mueller – who will pay for corruption? – National Conservative | Examiner.com http://www.examiner.com/conservative-in-national/of-holder-hillary-nappy-and-mueller-who-will-pay-for-corruption#ixzz1aauFBFwD

Here in the "pipe-line" trenches we are constantly aware of border issues. We see evidence around us, every day. But I can tell you that there has to be a consciousness-raising in those states which have chosen to disobey constitutional/federal law, declaring themselves to be "sanctuary states." 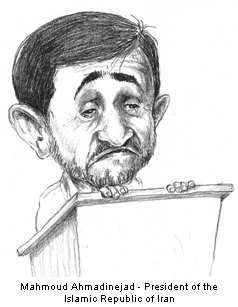 I watched, on FOX News, FBI Director Robert Mueller (holdover from Bush) assert the most inane bit of unconstitutional nonsense that reveals the mentality of the protectors of our nation's "security/prosperity" and sovereignty. His startling obiter dicta was "This case illustrates we live in a world where borders and boundaries are increasingly irrelevant."

In her TownHall.com article (access below) Katie Pavlich's reaction corresponds with my own. "Mueller's response is pathetic. Borders and boundaries of the United States are only 'increasingly irrelevant' because of the federal government's refusal to secure the Southwest border with Mexico. Terrorist organizations and now Iran are taking advantage of our dangerous open-border policies and have plans to kill us with it. Mexican drug cartels are clearly willing to help them. Despite what FBI Director Mueller says, borders and boundaries are very relevant, they just have to be secured and enforced, things this administration isn't willing to do."

We have, we now know, drug cartels like the ZETAS and the Sinaloa groups, and we have Iranian affiliated assassins, Hezbollah jihadists, and Iraqui drug gangs – deliberately being referred to by the press as Chaldean Christians in an attempt to distinguish the alleged "christian drug-gangs" from Iraqui Muslims – being aided by the Mexican cartels and human-cargo smuggling "coyotes." Such are brought into our nation to do the most possible damage.

We in Arizona are fighting to stop them. For the rest of the states north of us, we in Arizona are the first-line of defense. You should pray (and act) that we achieve optimal success – i.e., the most desirable possible success under expressed or implied restrictions imposed upon us by our own government in Washington, D.C.

Our only defense is an aware citizenry – aware and armed. We cannot rely upon government "czars," our congress, the main-stream media, and most certainly not the Obama administration.

We are at war. We can synthesize all kinds of hopeful euphemisms so as to not stir up the "masses" (as dissembling political poltroons put it), but when an enemy is attacking, and persons are killed, if you are worried about calling this what it is – WAR! – then be prepared for a destiny of manifest conquest.

It is proverbially true that we earn all defeats that result from ignorance, cowardice, denial and complacency. It is also axiomatic that when you refuse to punish the guilty, you succeed in punishing the innocent.