January 4, 2016
This past week I saw an article questioning why though the prices of gas are stable (down) the economy has not seemed to benefit from it. I had raised this point over a year ago and concluded that it was to the administration's advantage to display "cheap" gas prices all over kingdom-come to create a illusion that all is well. While, all the time, unemployment – meaning production of goods – was a mess.

Last night I saw Socrates in the City, a dialogue between two very brilliant men, Peter Hitchens and Eric Metaxas. One hour of time worth a virtual fortune!

Hitchens referred to himself as a "pessimist" which startled Metaxas. Mr. Metaxas said "but aren't you a realist?" (That was the same reaction I had when I heard Hitchens self-analysis.) Hitchens, a Christian and brother of the noted Darwinian "anti-theist" (Oh, ah, what a difference? Not a simple atheist?) Christopher Hitchens, said "No, I am, really, a pessimist." (I shook my head in disagreement thinking a believing Christian can never be a pessimist if he believes that God's will shall be done, as horrible as the outcome for so many might be.)


When the economy is said to be improving – becoming "unbusted" – persons hopefully imagine that the source of improvement is a move away from bureaucratically-administered socialism toward free-market/free-enterprise, constitutional republicanism. This blithesome expectancy I call the "Big Boom Theory." Beware of piggery pokery. 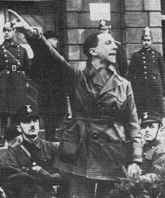 Consider what happened in Germany when after Germany lost WW I; Adolf Hitler won the confidence of the German populace, and the NAZI Party gained control. An assurance of productive peace made the German people imagine that they were at the beginning of an era of progressive change. NAZI Minister of Propaganda and Public Enlightenment Josef Goebbels wrote "Propaganda is not an end in itself, but a means to an end. If the means achieves the end then the means is good.........the new Ministry has no other aim than to unite the nation behind the ideal of the national revolution."

While other less politically ambitious European nations were satisfied with stability and the status quo, Hitler preached progress, to be accomplished through aggressive and truculent leadership and obedient social-civil order. The schematic of the NAZI Reich's expansionism was known, euphemistically, as political geography!

The German populace was told that their problems, after Germany had lost WWI, had been entirely a result of unfair treatment. Hitler sold the Germans on the superiority of the Arians – that the Teutons were descendants of the Nordic gods, a superior race of godlike beings.

In 1938, as the German populace, conditioned into resentment, enjoyed the shows of Teutonic majesty – music, color, parades, the German Museum of Arts' depiction of the beauty of the German form, and swastika-waving athletic competitions – Hitler plotted. He plotted, for the Volkdeutsch (the German race), what was called "Lebensraum." "Living room" would be acquired by force in order rescue and protect Germanic peoples dwelling in places like Czechoslovakia where the German residents lived under the rule of lesser Slavic types.

To the surprise of most German citizens, Hitler gave the Czechs an ultimatum. Turn over part of your nation to Germany or we will take it by armed force. The Czechs, divided over Hitler as an enigmatic paradox, some regarding him as an invader and others impressed by the economic benefits that could come by association with Hitler, surrendered their land for a temporal peace, adding to the perception that Germany, under the Fuehrer's despotic rule, had a magnificent future ahead. 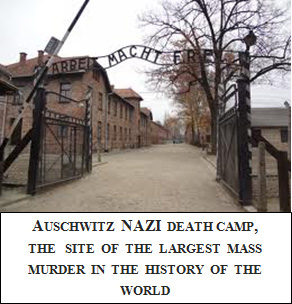 Germans were employed. Their pocketbooks were relatively full. They ate in relative luxury. And the Fuehrer had done that which he promised. The Reich's economy was booming.

The next move that stunned (into silence) the German citizenry was the Reichkriystallnacht – the pogroms against the Jews, and the burning down of thousands of synagogues. The seizing of other nations' territories and the properties and resources of disfavored peoples-groups was producing employment for the German workers in what was a booming war economy. 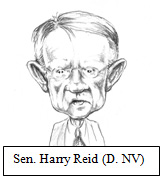 As the German military, with its massive accumulation of weaponry, set out to conquer the world to prove Arian superiority, the Jews were forced to surrender their assets to the government. It has been alleged that 30% of the NAZI war effort was funded by that which was expropriated from the Jews. Brutally confiscated resources and slave-labor produced the NAZI boom, bombs, and bodies.

We know the end result. The 1000 year Reich lasted less than a decade. When Germany "busted," the people had no money, no jobs, and no food, living in razed rubble in bomb-demolished cities.

We all know the story, at least as it has been told to us by the victors. It is sad, but true, some of the vanquished tell the story differently. Political loyalties die hard, as does pridefulness and blissful ignorance.

Is it possible that the United States can fall for the profoundly partisan chicanery of politicians like no-longer Senate majority leader Harry Reid (http://www.nationalreview.com/article/368369/harry-reids-obstructionism-andrew-stiles), the media, and the academic evangelists who preach a gloriously progressive world of global unity? Has the recent election given the Obama PROGROS their permanent walking-papers? Should we look forward with confidence to an economic boom that will save the middle-class from socialist fascism? 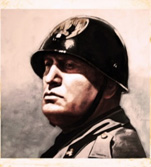 It's too early to tell. We can't, yet, presume anything other than that the political/ideological gnostics have always been with us, and though they make adjustments in their propaganda and their means, their ends will remain the same. Global Utopia under the hegemony of an all-powerful central rule!

So, patriots, beware the Big Boom Theory. Examine history, particularly the history of "progressivism" as produced and directed by all varieties of Fascism. Benito Mussolini "Il Duce," the genius of Fascist-Socialism wrote that there shall be three classes of "citizens": the political ruler above all, with the Administrative State; the favored "private" sector of especially rewarded industries who have made mutually beneficial alliance with the State; and the worker class. The "middle class" – virtual serfs who labor for the collective State, and never for themselves as individuals! Not citizens protected and secured in the Rule of Law, but subjects whose lives are directed by the arbitrary mandates and executive orders of some despotic, autocratic narcissist, some agency bureaucrat, some cadre of czars in positions of unconstitutional power, and some politically-beholden Krytocrat (i.e., "judge").

What can we project for what we still call the United States: the typical complacency that is adopted by Americans when they see some economic improvement? A...boom? Sold to us, with stultiloquent rhetoric, by politicians, sympathetic advocacy journalists, sustainable development property-snatching developers, and con-men who sell the product called "confidence in progressive change"; these connivers who condone wrong doing and bring disrepute upon the majority of honest, hard-working citizens of America who love their families, their neighbors, and their nation.

I do know that the general American populace is not stupid. I do think, however, that persons who dream Big Boom Theory tend to be overly optimistic...believing in the PROGRO dream of the moment, progressive change, even though the convoluted actualities are a far cry from being comprehended.

The day after the midterm election MSNBC's Chris Matthews went into a virtual rant on the subject of Barack Obama's ignoring the Constitutional powers of Congress preferring to make his own laws and rules by executive action. Matthews said that Obama didn't accept the 2014 midterm election as "legitimate" and that in the matter of "illegal immigration "You've got two ships passing in the night...Obama will not recognize that larger ship (opposed to illegal immigration) that voted last night."

And Pat Caddell, former pollster for Jimmy Carter recently argued that the proposed executive action suggests Obama "doesn't believe in negotiating... . He is willing to blow his party and the country up because he is a narcissistic man who doesn't have a clue how to do his job."

I've a question for you, in closing. These following words were spoken on January 21, 2009. Who spoke them, and what was the occasion? "America has carried on not simply because of the skill or vision of those in high office, but because We the People have remained faithful to the ideals of our forebears, and true to our founding documents." These words praising fidelity to the Declaration of Independence and the Constitution were spoken by Barack Obama at his Inaugural Address, January 21, 2009.

Obama closed his inaugural: "(W)ith eyes fixed upon the horizon and God's grace upon us...God bless America. And God bless the United States of America." I don't recall the ACLU challenging him on this. Do you?

Where will America head now? Where will the nation head after the next presidential election? We shall see. At this point only God knows.