Lloyd Marcus
A cure for racism in America: seeing people as individuals

July 6, 2009
Some people are screwed up. Broken. They choose to hate and nothing will change their minds. I believe most people are basically good. Given an opportunity, they work things out. Here is an example. 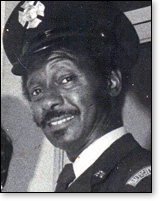 In 1956, my dad, Dr. Rev. Lloyd Marcus, Sr., was one of the first blacks to break the color barrier into the Baltimore City Fire Department at Engine 6. Unlike the white firefighters, Dad did not have free reign of the fire house. A bunk, toilet, sink, and single set of eating utensils were marked "reserved" for him. Even the general coffee pot was off limits. White firefighters voted on which TV program to watch. Dad was excluded.

They refused to speak to Dad, except to criticize or chastise him for a rookie mistake. His pleasant "Good Morning" and "Good Evening" were met with cold stares and silence. Sometimes their disdain got to Dad. Feeling obligated as a representative of Christ, he stayed pleasant.

Dad was a young assistant pastor at a storefront church. Optimistic by nature, he found a blessing in the white firefighter's rejection. Dad said it caused him to spend a lot of time praying and studying his Bible in the back storage room, which they sarcastically called "the pastor's office."

Dad could not find the spoon marked "reserved" to stir his cup of instant coffee. He put another spoon in his cup and went to get milk. Upon his return, Herman, a white firefighter had the spoon in his hand. "This is one of our spoons. You keep your filthy hands off of it!" Herman threw the spoon into the sink, turned, and walked away. Dad said he took his Bible to the back storage room and prayed, "Lord, give him to me."

Herman and Dad had another run-in. Like the whites, Dad propped his foot on a wooden chair while shining his shoes. Herman ordered Dad to get his foot off of the chair. Dad said he was not harming the chair. Herman said, "If you don't get your foot off of that chair, I'm going to punch you in your black nose!"

THAT WAS THE LAST STRAW! Despite knowing he could be terminated and that he had five kids and a wife to feed, testosterone won over reason. Dad challenged Herman to "duke it out" outside after their shift. The shift officer caught wind of their scheduled duel and ordered Dad to go home IMMEDIATELY after his shift.

Two years passed. A new white firefighter came upstairs to Dad's bunk and invited him to join them for a cup of coffee. Dad accepted. Though hearing grumbling, Dad drank his first cup of coffee from the general coffee pot.

Dad stayed committed to excellence in his work and remaining pleasant.

About four years into Dad's career, Engine 6 responded to a fire in a two-story building. The shift officer ordered his men out of the blinding smoke-filled inferno. A firefighter named John asked, "Where's Marcus?" John immediately ran back up the ladder into the deadly smoke and flames. Herman, who once threatened to punch Dad in his black nose, was right on John's heels.

Dad's mask had malfunctioned. He became overcome by smoke and disoriented. A thought came to him, "Everyone has to go sometime. You're going to die by fire." Dad instantly said, "Jesus! Jesus!" Then, the floor turned upside down as he passed out. Dad awoke to someone calling his name, "Marcus!" "Marcus!" "Marcus!" Dad yelled, "Over here!" John saw the light from Dad's flashlight. John crawled towards the light. He dragged Dad to the window where he and Herman carried him down the ladder. Dad said he remembers Herman's comforting voice, "Hang in there Marcus. You're okay. We got you...we got you!"

The hospital staff had to open windows because the smoke in Dad's clothes and skin burned their eyes. Miraculously, Dad was not burned and made a full recovery. Dad went on to win Firefighter of the Year two times.

Herman, John, and Dad became great friends. John was a licensed plumber on the side. On one occasion when our pipes froze, John repaired them in freezing weather in the crawl space under our home for free. Dad, now 80, was honored to speak at both Herman and John's funerals.

What changed the hearts of these white men causing them to risk their lives to save the life of a black man? I do not know. However, I suspect it had something to do with Dad's character.

Herman, John, and my dad were three decent men with various upbringing and beliefs who found common ground and friendship. God did answer Dad's prayer. He gave Dad Herman and threw in John for good measure.