Lloyd Marcus
Who will President Obama drum up hate against next?

July 26, 2009
We have all watched this scene in numerous Western movies. The sheriff says his prisoner will receive a fair trial when the judge arrives in the morning. But, one loud mouth stands on the steps of the jailhouse and works the crowd into a frenzy. The enraged mob breaks down the door, brutalizes the sheriff, drags out the prisoner, and hangs him. It is later discovered that the prisoner was innocent. As a child watching these movies, I was amazed how people sheepishly followed one loud mouth. 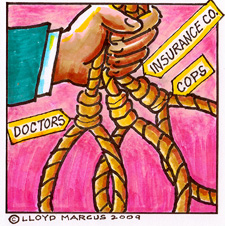 I am amazed that the President of the United States uses the same technique as the loud mouth guy in the movies. To pass his stimulus package, President Obama, from his bully pulpit, created an angry mob against corporations, executives, Wall Street, and the auto industry. Thus, when he outrageously overreached his authority by firing the CEO of GM, his angry mob replied, "Yeah, yeah, get them! Let's string them up!"

Now, to pass his health care, Obama is back on the jail house steps yelling, "Let's drag out those dirty low-down doctors! They perform unnecessary surgery on kids! And those insurance companies, they only care about profits! Are you gonna stand for that?" The crowd, "No! No!" Obama, "Well, what are you gonna do about it?"

The latest on President Obama's hit list are America's policemen. "Let's get those stupid racist profilers!" Without knowing the details of the Gate's case, President Obama said the police acted stupidly. He obviously spoke from his belief that black men are usually abused by the police.

While the officer in the Gate's case, according to the police report, performed professionally and by the book, there are bad apples in every profession. Shamefully, race profiteers such as Al Sharpton relish every isolated incident of unprofessional behavior, viewing it as a golden opportunity to portray all police as racists. I have a few incidents of police behavior and profiling to share.

In the late 60s, a black relative had a nervous breakdown. He had his two young sons held hostage locked in the basement of their home threatening to kill himself and the kids. I was there attempting to calm his hysterical wife. Two white police officers arrived first at the scene: a young fit man and a veteran whose physique would lead you to believe the stereotype about cops and donuts could be true.

The wife of my relative feared for the life of her husband and kids. Not only at the hands of her whacked-out husband, but by the white police. She thought their attitude would be, "Let's just shoot this black nigger!"

The older cop waddled to the basement door, "Come on son, I know life gets hard, but you don't want to do this....." He skillfully connected with my relative. Within what felt like no time at all, my relative tearfully surrendered to the veteran policeman. By the time several police cars had arrived, the veteran had my relative cuffed and gently secured into his police car. My relative received mental treatment and later returned to his family.

Years ago, my wife and I, a black/white interracial couple, were stopped at a traffic light. Police demanded we get out of our car. A robbery had just taken place and we fit the description even down to the make and color of our car. After checking us out, driver licenses and etc., the polite officers apologized for the inconvenience and went on their way. We were not manhandled or abused in any way.

I remember another incident in an upscale neighborhood in Maryland. Neighbors saw two young black men dressed in gangster attire, walking around. Though they looked out of place, no one checked them out because they feared being called racist. These men hijacked a woman's car dragging her and threw her baby out of the back seat.

I was raised in an all-black community. When preppy white boys cruised around our community, 90% of the time they were there to buy drugs.

My point is this. It is absurd to ignore common sense and life experiences for fear of being accused of profiling.

Who will President Obama attack next on the jailhouse steps demanding America drag the low-down varmints out and teach them a lesson?