January 16, 2010
This topic may infuriate many of my fellow blacks. I am talking about black monolithic thinking and black racism.

Black actor Michael Clarke Duncan is probably best known for his brilliant performance in the movie "The Green Mile." I watched a Steve Harvey special on BET (Black Entertainment Television). Harvey was on stage in a hall filled with a mostly black audience. He criticized Duncan for playing an ape in the 2001 "Planet of the Apes" movie. Harvey said that Duncan playing an ape would set blacks back many years. He said he asked Duncan, "How much are they paying you to play an ape?" The black audience enthusiastically agreed with Harvey. Harvey even said that when Duncan appeared on his radio show, several black callers pressured him to chastise Duncan for accepting the role. 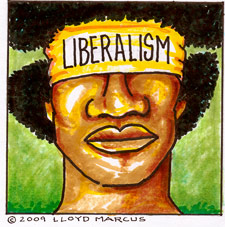 Am I crazy, or is Harvey's and his audience's problem with Duncan playing an ape absurd? White and black actors played apes in the movie. Once in full ape makeup, it is impossible to distinguish who is black or white. How is Duncan harming or betraying his race?

In typical "groupthink" fashion instilled in the black community by their black liberal plantation overseers and Democrats over the years, the independent-minded black actor was expected to turn down a role in a major motion picture to appease an erroneous perception.

Of course, I realize that whites have called us monkeys and apes in the past. But what does that have to do with Duncan playing a role? Will whites say, "Duncan played the role so well, perhaps blacks really are monkeys"? The black criticism of Duncan is based on paranoia and a bit of racism  kind of a "we know how those white folks think" attitude. "How much are they paying you to play an ape?" asked Harvey. Isn't it fair to assume that Harvey is really asking Duncan, "How much are they paying you to betray your people?"

Black presidential candidate Barack Obama receiving 96% of the black vote can be described only as an example of groupthink and racism. I caught heck for not sheepishly following the lead of my fellow blacks in voting for and worshiping at the feet of their Great Black Hope. How dare I ignore Obama's skin color and scrutinize this man seeking to be elected leader of the free world?

Blacks expected me to ignore Obama's associations with radial America-haters, his voting three times against protecting babies who survive abortions, and his socialist agenda of redistribution of wealth. Black America decided that Obama's skin color trumped everything, and I had better get in step. As Rev. Wright said, "I am tired of Negroes who just don't get it!"

Such attacks against black individuality and attempts of control by an indoctrinated black community and liberals truly offend me. I am an individual who happens to be black. My race is the human race. And yet, do I enjoy seeing blacks succeed outside of the box set for them by liberals? Absolutely, because I am sick of liberals and black overseers dictating what is considered acceptable black behavior. Black overseers (Sharpton and company) were not outraged because Tiger Woods cheated on his wife, but they were offended by his choice to have affairs with white women.

In urban communities where black male school dropout rates have reached epidemic levels, studious and articulate blacks are accused of trying to be white.

I never dreamed that we blacks would need to be liberated from ourselves. Like all humans, blacks are extremely diverse in their talents, tastes, and desires. We must stop allowing ourselves to be manipulated and intimidated into collectively voting for Democrats in order to keep Sharpton, Jackson, and the NAACP employed.

Though our ancestors came to America on slave ships, we blacks are extremely blessed to be born in the greatest nation on the planet. It is time we let go of the past. Yes, I know this will infuriate and shock some of you (race profiteers), but it is true. Black overseers and liberals must stop exploiting America's past sins and viewing America from a 1950 point of view. For the sake of our children, blacks must see America for what it truly is today: a wonderful country where if they would simply get out Obama administration of the way, anyone with an idea, a dream, and a willingness to work can succeed. It is time to end "groupthink" and black racism and celebrate individuality and independence.

For this cause, I say to Al Sharpton, Jeanine Garafolo, and all you other libs, "Let my people go!"