March 25, 2010
As millions of my fellow Americans, I am outraged, devastated and extremely angry by the Democrats' unbelievable arrogance and disdain for We The People. Despite our screaming "no" from the rooftops, they forced Obamacare down our throats. Please forgive me for using the following crude saying, but it is very appropriate to describe what has happened. "Don't urinate on me and tell me it's raining." Democrats say their mission is to give all Americans health care. The Democrats are lying. Signing Obamacare into law against our will and the Constitution is tyranny and step one of their hideous goal of having as many Americans as possible dependent on government, thus controlling our lives and fulfilling Obama's promise to fundamentally transform America. 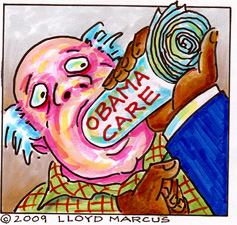 I keep asking myself. How did our government move so far from the normal procedures of getting things done? Could a white president have so successfully pulled off shredding the Constitution to further his agenda? I think not.

Ironically, proving America is completely the opposite of the evil racist country they relentlessly accuse her of being, progressives used America's goodness, guilt and sense of fair play against her. In their quest to destroy America as we know it, progressives borrowed a brilliant scheme from Greek mythology. They offered America a modern day Trojan Horse, a beautifully crafted golden shiny new black man as a presidential candidate. Democrat Joe Biden lorded Obama as the first clean and articulate African American candidate. Democrat Harry Reid said Obama only uses a black dialect when he wants.

White America relished the opportunity to vote for a black man naively believing they would never suffer the pain of being called racist again. Black Americans viewed casting their vote for Obama as the ultimate Affirmative Action for America's sins of the past. 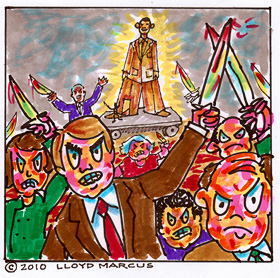 Just as the deceived Trojans dragged the beautifully crafted Trojan Horse into Troy as a symbol of their victory, deceived Americans embraced the progressive's young, handsome, articulate and so called moderate black presidential candidate as a symbol of their liberation from accusation of being a racist nation. Also like the Trojan Horse, Obama was filled with the enemy hiding inside.

Sunday, March 21, 2010, a secret door opened in Obama, the shiny golden black man. A raging army of Democrats charged out. Without mercy, they began their vicious bloody slaughter of every value, freedom and institution we Americans hold dear; launching the end of America as we know it.

Wielding swords of votes reeking with the putrid odor of back door deals, the Democrats

landed a severe death blow to America and individual rights by passing Obamacare.

The mainstream liberal media has been relentlessly badgering the Tea Party movement with accusations of racism. Because I am a black tea party patriot, I am bombarded with interviewers asking me the same veiled question. "Why are you siding with these white racists against America's first African American president?" I defend my fellow patriots who are white stating, "These patriots do not give a hoot about Obama's skin color. They simply love their country and oppose his radical agenda. Obama's race is not an issue."

Recently, I have come to believe that perhaps I am wrong about Obama's race not being an issue. In reality, Obama's presidency has everything to do with racism, but not from the Tea Party movement. Progressives and Obama have exploited his race from the rookie senator's virtually unchallenged presidential campaign to his unprecedented bullying of America into Obamacare. Obama's race trumped all normal media scrutiny of him as a presidential candidate and most recently even the Constitution of the United States. Obamacare forces all Americans to purchase health care which is clearly unconstitutional.

The mainstream liberal media continues to portray all who oppose Obama in any way as racist. Despite a list of failed policies, overreaches into the private sector, violations of the Constitution and planned destructive legislation too numerous to mention in this article, many Americans are still fearful of criticizing our first black president. Incredible.

My fellow Americans, you must not continue to allow yourselves to be "played" and intimidated by Obama's race or the historical context of his presidency. If we are to save America, the greatest nation on the planet, Obama's progressive agenda must be stopped.