May 8, 2010
Folks, our country is in big trouble. What kind of man do we have in the White House? President Obama is a Harvard-educated lawyer. Thus, since he attended such a renowned school, I can only conclude that Obama willfully and knowingly distorted/lied about the plight of Hispanic-Americans in Arizona and the state's immigration law when he said, "...but now suddenly if you don't have your papers, and you took your kid out to get ice cream, you're gonna be harassed, ..." 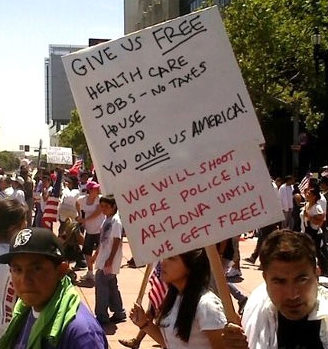 Obama's statement simply is not true. The Arizona law goes into effect only after a subject has or is suspected of committing a crime. So, if a Hispanic person does not rob the ice cream shop, it is safe to say he and his child can enjoy their ice cream in peace.

And yet, our characterless president and the liberal mainstream media in solidarity with those who boldly and arrogantly break our laws are shamefully promoting lies about the Arizona immigration law. Why? To recruit future Democrat voters.

Obama and the liberal mainstream media apparently couldn't care less about the national racial tension and violence fueled by their irresponsible distortion of the Arizona law. This is the Al Sharpton and Tawana Brawley Hoax all over again. Only this time, it is the President of the United States spreading lies and fueling the flames of racial hatred.

As I have stated on numerous occasions regarding other national issues, it is always all about Obama. His political agenda and him "looking good" trump national race relations and even the best interests of our country. Again, I say, dear Lord, what kind of man do we have in the White House?

As a black patriot of the Tea Party Movement, the liberal mainstream media practically strapped me down and waterboarded me, attempting to force me to confess seeing racist signs, which I never saw, at tea party rallies. Meanwhile, they are completely blind and silent about the outrageous, hate-filled, racist, traitorous, and violent signs on display at the anti-Arizona immigration law rallies. (http://www.youtube.com/watch?v=0LHRzxgAxRo)

Recently, the word of the month from Obama flacks in the liberal mainstream media was "sedition," which Webster defines as "the stirring up of discontent, resistance, or rebellion against the government in power." Obama's homeys in the media were aggressively attempting to make the "S"-word stick to tea party patriots, conservative commentators, and anyone who opposed Obama's agenda.

Well excuuuuuuse me, but given Obama and the liberal mainstream media's distortion and support of protesters against the Arizona law which mirrors federal law, is it a reach to say Obama, his media and his protesters are guilty of Sedition?

I am also struck by the breathtaking arrogance and entitlement mindset of the anti-Arizona immigration law protesters. The liberal mainstream media portrays illegal immigrants as humble peasants who are seeking a better life while hiding in the shadows, while in reality, those attending the rallies were angry, demanding, and some were even violent. Their attitude is "in your face, America! Yes, we are here illegally, and you had better give us what we want!"

Who do they think they are? What has inspired them to boldly ignore our laws? I submit that these illegals and their liberal supporters are emboldened by the usual suspects: the liberal mainstream media, the Democrats, and, outrageously, the President of the United States.

Obama received 96% of the black vote. A large percentage of those black voters were the product of decades of indoctrination by the liberal mainstream media and Democrats: America is racist, out to oppress you, and owes you. Now Democrats are employing their same tried-and-true tactics on illegals to birth a new crop of victim- and entitlement-minded Democrat voters.

These new potential Democrat voters already believe that America sucks. Notice the small number of American flags at their rallies verses the sea of U.S. flags at the tea parties. Many hate capitalism and are not interested in learning English. There is a huge difference between wanting to be an American and using America.

In New York harbor stands a lady with her arm raised to the sky. As ambassador for the American people, she warmly embraces all who legally seek to join our great national family.

Despite traitorous lies from an enemy within, race, color, and creed are irrelevant. All we require for the privilege and honor of becoming an American is a respect for our laws and a desire to contribute to this extraordinary experiment called America, the greatest nation on the planet. To all who feel this way, we say, "Welcome home!"