August 10, 2010
The National Press Club in Washington DC was the scene of an historic event, August 4, 2010. For the first time in U.S. history, black conservative leaders from across America gathered for a national press conference. Their purpose was three-fold. One, to rebuke the NAACP's resolution accusing the tea parties of being racist. Two, to introduce themselves to America. Three, to dispel the myth that black conservatives are as rare as Bigfoot sightings. 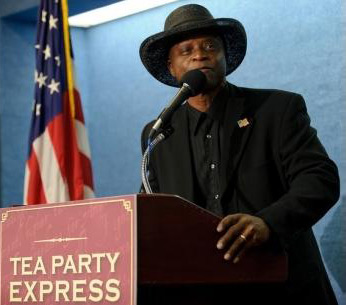 I am Lloyd Marcus, the press conference organizer and spokesperson of Tea Party Express which hosted the event. Constantly, I am confronted by the liberal mainstream media, "Where are the conservative blacks?"

The NAACP's politically motivated, despicable attack on the tea party movement based on unfounded charges of racism created the "perfect storm" for black conservative leaders, organizations, authors, and entertainers to bond together to defend their, mostly white, fellow patriotic, God-fearing Americans.

The National Black Conservative Press Conference featured speeches and Q & A by a "dream team" of America's top black conservatives.

Of the approximate 30 to 40 media outlets in attendance, two black reporters, one from "Black Enterprise" and the other from another black media outlet, were stunningly hostile and closed-minded during the Q & A.

Two hours of listening to unquestionable truths, historical facts, and compelling speeches which argued the virtues of conservatism, the error of socialism, and the evil divisiveness of identity politics had no effect on the two black reporters. Locked in their paradigm, both reporters boldly displayed their contempt. To them, we black conservatives were disgraceful sellout Uncle Tom traitors to our race shamefully attacking their black president.

The press conference revealed an extraordinary truth. My brother who is conservative brought my 83 year old dad who is a staunch Obama supporter to the press conference. My dad admitted to my brother that the content of the speeches was indisputable. However, the emotional scars from the humiliating racism he endured in his youth are so deep, he could never forsake America's first black president. Dad said just thinking about the humiliation he suffered in his youth still brings tears to his eyes after all these years.

Dad's admission opened my eyes. It explains how he, a committed Christian, could support a president whose policies and attitudes border on being anti-Christian. Dad's loyalty to President Obama is solely emotional  the realization of an unimaginable impossible dream. Only through prayer and God's miracle working power will my dad and many black seniors' hearts be healed, enabling them to truly forgive America for her sins of the past.

The press conference energized my brother. He said it validated his conservative beliefs. 99% of his fellow black associates worship Obama. Hearing the speeches of the black conservative leaders confirmed to my brother that he is not alone in his opposition to the Obama agenda. My brother said humorously, "So, I'm not crazy."

White response across America to the press conference has been extraordinary.

Kudos and thanks for putting the event together are coming in from grateful whites who were moved, excited, and amazed by what was said. Apparently, white America is not accustomed to hearing blacks verbally waving Old Glory expressing pride in being Americans.

Thanks to liberal Democrats and their minions who control the liberal mainstream media, white Americans are accustomed to blacks laying "guilt trips" on them. The liberal mainstream media typically portrays blacks monolithically, verbally waving, not our stars and stripes, but flags which proclaim, "America sucks!", "America is Racist!", "We Blacks Are Victims!" and "You Whites Owe Us!"

Ironically, Tea Party Express, which has been viciously and falsely accused of racism by the NAACP and the liberal mainstream media, reached out, united, and provided a platform for black conservative leaders to introduce themselves and their missions to America  an unprecedented achievement.

Tea Party Express hosting the extremely successful first National Black Conservative Press Conference has to be the NAACP's and liberal mainstream media's worse nightmare. While many black conservative organizations have been individually fighting the good fight for the hearts and minds of Black America for many years, the impact of their collaborative effort at the Black Conservative Press Conference is proving to be immeasurably powerful.

By the way, my dad called me wanting to know when a DVD of the press conference would be available. Praise God!