October 21, 2010
The Associated Press reporter confronted me with the NAACP's accusation that Tea Party Express is paying me, a black tea party patriot, to say the Tea Party Movement is not racist. In essence, the NAACP is calling me a characterless paid "mouth piece" traitor to my race.

Fun how characterless people project their sins upon others. The modern day NAACP have abandoned the vision and dream of the Civil Rights Movement Founding Fathers years ago to be granted a seat at their liberal democrat Massa's table. And they dare call me a traitor.

Meanwhile, they shamelessly betray blacks by convincing them they are victims in America which is the greatest land of opportunity on the planet for all who choose to "Go for it!"

The NAACP's attack on me and their so-called documented report that the tea parties are racist are a part of their desperate, "throw everything against the wall and see what sticks" get out the vote campaign.

With only two weeks remaining before the predicted democrat Armageddon at the polls, democrats are franticly attempting to fire up their lethargic base.

The latest and most evil tactic of the Democrats via the NAACP to ignite their base is "hate" via race baiting. "Let's get black America angry at those tea party folks who are mostly white."

On this third day of the Tea Party Express IV national bus tour, I have been swamped by interviewers from around the world, all asking me to respond to the NAACP report that the tea parties are racist.

I'm telling you what I told the world, "The NAACP's report is hogwash! I've attend over two hundred tea parties across America. I'm right in the middle, in tune, with the pulse of the movement; hearing their concerns and feeling their hearts. All of the racism is coming from the Obama camp. We tea party patriots are opposing Obama's socialist agenda, not his skin color. Polls say 25% of tea parties attendees voted for Obama."

So NAACP, your latest trick will fail because it is divisive and evil. Good aways triumphs!

Our next Tea Party Express rally will be in Los Angeles, California. Pat Boone is scheduled to speak. I wonder if Pat will wear his trademark white shoes? 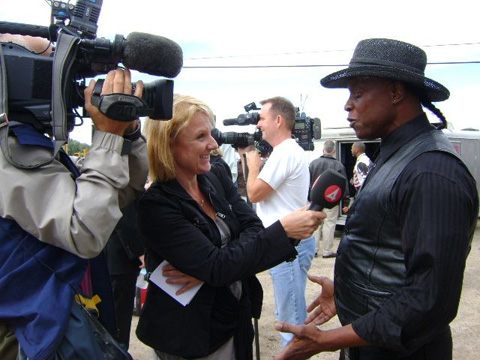