October 23, 2010
Who are these people? We've seen the plot theme in numerous movies, a rag tag eclectic highly skilled team is gathered for a mission greater than themselves.

We met radio talk show host Eddie Burke while up in Alaska campaigning for Joe Miller. Eddie is a duty and passion driven conservative; one of us. Eddie said he was extremely excited upon receiving the call to join our TPX IV team. (EddieBurkeforAlaska.com)

POLATIK is the stage name of young Hispanic conservative rapper, David Saucedo. We heard David rap a year ago at our rally in Waco, Texas. David's early youth was troubled including time in prison. Honoring Christ for turning his life around, David calls his rap style, "His Hop." David and his wife covet your prayers for their two year old daughter who is suffering with Leukemia. (Polatik.com)

Ladies and gentlemen, singer/songwriter, Miss Diana Nagy. This beautiful lady has been using her voice to support, particularly our troops, and our country for years; long before the Tea Party Movement. Diana's song "Where Freedom Flies" moves many to tears during our military tribute; a main stay feature of TPX rallies. (DianaNagy.com)

Radio Patriot, Andrea Shea King, was introduced to TPX, I'm proud to say, by me. I heard Andrea's radio show one night and was blown away. I thought, "This woman is as compelling as Rush Limbaugh." (Radiopatriot.WordPress.com)

Tea Party Express found yours truly three years ago. I was performing at a rally for our troops in Washington DC.

These are just a few members of the Tea Party Express IV "A" Team. Our rallies in every city feature major name guest speakers such as Sarah Palin, Pat Boone and Newt Gingrich along with locals.

Our team travels on three buses equipped with bunks, lounge areas, restrooms, kitchens and satellite television. One has worldwide media; Spain, England, Japan, Sweden, Ireland and more. Another bus is for publishers, bloggers and speakers. I'm on the fun bus, the entertainers bus.

Talk about a historic moment, on one of the 400 mile rides between cities, singer/songwriter Jon David and Polatik wrote a song together. I predict it will be a mainstream hit. (AmericanHeartMusic.com) 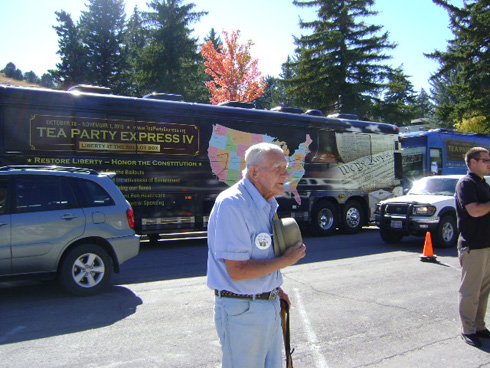