January 19, 2011
While reading her emails, I heard my wife say, "This is so absurd, it has to be an internet hoax doctored photo." It was a photo of a rally on MLK Day hosted by the South Carolina NAACP held at the state house. The statue of George Washington at the state house was boxed in on three sides hidden from the rallying crowd. The NAACP said they covered the statue because they "didn't want to offend anyone." 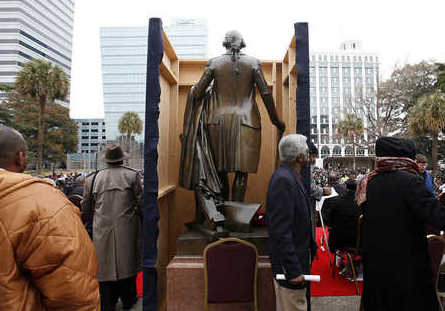 Upon investigation, the photo was confirmed to be real.

This misdirected ridiculous behavior by the NAACP epitomizes why I, a black American, will never join or give one nickel to this exploitative divisive organization. With black high school dropout rates at epidemic levels, 80% of black kids growing up in fatherless homes and 50% of black pregnancies ending in abortion, why on earth would the NAACP invest time and energy into running around covering up statues of long dead white guys; rather than addressing "real" issues plaguing black America today?

Regardless of what you think about George Washington, he was our first president. Exploiting the occasion of MLK day to dis America's first president is part of the NAACP's continuing effort to find irrelevant crap to protest about, impugn the greatness of our country and live in the past as if American race relations have not progressed since the 50s.

I've heard, "Always follow the money." Somewhere along the way, the once great NAACP strayed from being dignified true advocates for fairness, civil rights and holding blacks accountable to "gettin' paid."

The NAACP's searching the past for evidence to reenforce their victim status and protesting things which have zero effect on the lives of contemporary black Americans is laying the foundation for more government handouts, extortion of businesses and reparations.

I am president of the NAACPC, National Association for the Advancement of Conservative People of All Colors. If he were alive today, MLK would be a proud member. http://www.facebook.com/group.php?gid=118694148152736&ref=ts