February 17, 2011
The liberal media is either stupid, insane, or totally in the tank for Obama. My gut tells me it is the latter. Folks, America is in deep trouble. The liberal media's blind, all-consuming idolatry of the first black president trumps national security, our economy, and America itself. I'm talkin' of the chain Obama-mania. In the eyes of the liberal media, it is ALL about Obama, mm, mm, mm. 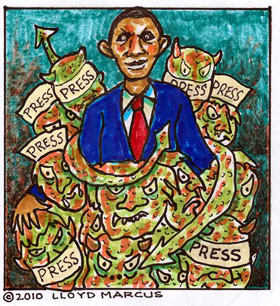 How else can you explain Obama presenting his budget which continues to spend trillions we do not have, while almost in the same breath, proclaiming we must live within our means and the liberal media not calling him on it  totally ignoring the contradiction. Are they stupid? Are they crazy? Or, have they completely, without pretense of objectivity, thrown their chips "all in" for Obama, turning their backs on America to prop up their Golden Child?

With the exception of his skin color, Obama's presidency is unprecedented for all of the wrong reasons. Frighteningly and dangerously, none of the rules apply to this man. Obama's arrogance knows no boundaries  from taking over private secular industries to passing Obamacare against the will of 70% of the American people. The list of his bypassing the rule of law, overreaching, and power grabs goes on and on.

Most recently, Obama, our omnipotent ruler, flipped the bird to the Constitution, again. A federal judge ruled Obamacare unconstitutional, which means "Stop"! King Obama ignored the ruling and continues to implement Obamacare.

Meanwhile, Obama's liberal media supplicants eagerly worship at his feet and vow to punish all who dare oppose him or his socialist agenda. As I stated, patriots, our country is in deep trouble with this president in office.

I am Vice Chairman of "One Million People To Defeat Barack Obama 2012." Please join us!